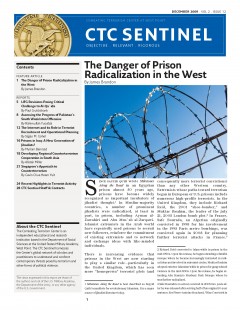 The Danger of Prison Radicalization in the West

Islamist extremists in the Arab world have repeatedly used prisons to recruit new followers, reinforce the commitment of existing extremists and to network and exchange ideas with like-minded individuals. There is increasing evidence that prisons in the West are now starting to play a similar role—particularly in the United Kingdom. It is important, therefore, to understand how radicalization in prison occurs. This article is largely based on accounts, letters and testimonies smuggled out of British prisons by suspected and convicted extremists, supported by official government reports and surveys.

The Danger of Prison Radicalization in the West

The Internet and its Role in Terrorist Recruitment and Operational Planning