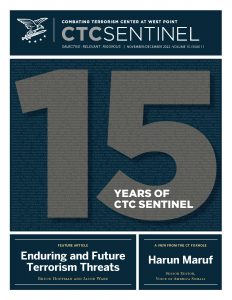 In December 2007, the Combating Terrorism Center at West Point launched a new monthly publication with the aim of drawing on the “Center’s network of scholars and practitioners dedicated to the study of terrorism and counter-terrorism to provide the most well-informed forum” for the analysis of the most pressing security challenges facing the United States and its allies. This issue marks the 15th anniversary of CTC Sentinel. It has been my great privilege to serve as editor in chief for exactly half that period. We hope the publication has helped contribute to greater understanding of the complex and continuously evolving counterterrorism problem set. My predecessor, Erich Marquardt, deserves special credit for the years he spent building CTC Sentinel into a powerhouse of scholarly research. I’d like to also acknowledge the extraordinary contribution of our managing editor, Kristina Hummel, and the wise counsel of our editorial board members: Colonel Suzanne Nielsen, Brian Dodwell, Don Rassler, and Colonel Sean Morrow. The huge time and energy invested in CTC Sentinel by our leadership and faculty over the past 15 years has helped drive us forward in our mission of relentless improvement. Our choice of cover for this anniversary issue reflects our immense gratitude to our many contributors over the years whose insights and scholarship have been essential to the counterterrorism mission.

In this month’s feature article, Bruce Hoffman (whose insights were featured in the inaugural issue of CTC Sentinel) and Jacob Ware examine the terrorist trends and threats to watch out for in 2023 and beyond. Our interview is with Harun Maruf, the longest-serving editor of VOA Somali, the Somali-language service of the U.S. government-funded broadcast service Voice of America. Samira Gaid argues that “recent military breakthroughs against al-Shabaab have provided Somalis with an historic opportunity to now do what is necessary to bring lasting security to the country” but that making enduring gains will require learning lessons from previous failures. Wassim Nasr outlines how the Wagner Group is aggravating the jihadi threat in Mali, creating the risk of further destabilization in the Sahel region.