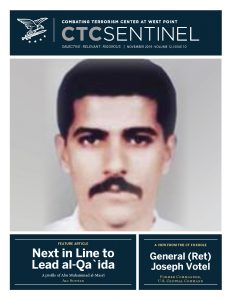 This past summer, the United Nations Monitoring Team charged with tracking the global terrorist threat assessed that “the immediate global threat posed by Al-Qaida remains unclear, with [Ayman] al-Zawahiri reported to be in poor health and doubts as to how the group will manage the succession.” In our feature article, Ali Soufan profiles the veteran Egyptian jihadi operative Abu Muhammad al-Masri and outlines why he appears to be next in line to lead al-Qa`ida. Soufan writes: “Abu Muhammad has long played a critical role in al-Qa`ida, both as an operational commander and as a member of the governing shura council. Yet despite his importance to the organization, Abu Muhammad remains a shadowy figure. Little is known about his early life or his current activities. Unlike most al-Qa`ida Central figures, he is based not in northern Pakistan but in Iran, where he was previously imprisoned and now resides under a murky arrangement by which he is apparently allowed a great deal of freedom while still being barred from leaving the country.”

Our interview is with General (Ret) Joseph Votel who retired as the Commander of U.S. Central Command earlier this year after leading a 79-member coalition that successfully liberated Iraq and Syria from the Islamic State caliphate. He is now the Class of 1987 Senior Fellow at the Combating Terrorism Center.

Michael Horton examines how Somaliland combats al-Shabaab. He writes that “the government has, with limited means, denied al-Shabaab the operational space it requires through the implementation of a virtuous circle that builds on local buy-in and uses HUMINT as a force multiplier.” He notes, however, that the terrorist group is increasingly active along Somaliland’s border with Puntland “where this virtuous circle is under increasing strain.”

There has been significant concern about the potential national security threat posed by the significant numbers of Islamist extremists convicted of terrorism-related crimes in Western countries who are due to complete their sentences in the coming years. Using nearly 30 years of data, Christopher Wright finds that “while not zero, the recidivism rate of those involved in jihadi terror plots targeting the United States is much lower than that of common criminals.”

Next in Line to Lead al-Qa`ida: A Profile of Abu Muhammad al-Masri

An Examination of Jihadi Recidivism Rates in the United States