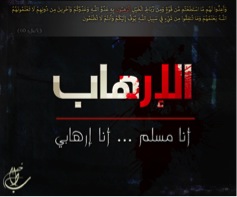 The image, which was posted to a web forum, contains the bloody caption: “al-Irhab-ana muslim…ana irhabi” (“terrorism-I am a Muslim…I am a terrorist”). The caption follows a quote from the Qur’an (Q8:60) that contains the verb “turhibuna” (“you will instill fear/ terrorize”). Invocation of the verse in conjunction with the above predication (“I am a terrorist”) demonstrates an embrace of the negative Western term by infusing it with a Qur’anic context and meaning. Above the image in the post, the designer wrote that he created the image for the al-Fallujah forum before it was shut down.  It satirizes a well-known series of public service announcements against terrorism, that concluded with the tagline “al irhab la din lahu” (Terrorism has no [basis in any] religion).

Video Capture from Series on Battle of Fallujah