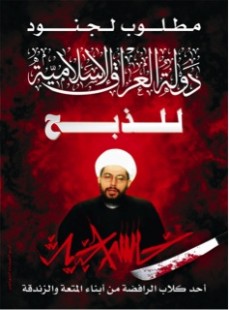 The image is a wanted poster distributed by the Islamic State of Iraq. The text in the image reads (from top to bottom): “matlub li-junud dawlat al-‘iraq al-islamiyya lil-dhabh—Khasir al-Khabith, ahad kilab al-rafida min abna’ al-mut‘a wal-zandaqa” (“wanted by soldiers of the Islamic State of Iraq in order to be slaughtered—Khasir Khabith [derogatory nickname for Yasir al-Habib], one of the Rafida [lit. rejectionist, a derogatory term for Shi‘a] dogs who practice mut‘a and zandaqa”). Mut‘a is a term from Islamic law that refers to a usufruct marriage contracted for a specified, limited amount of time exclusively for sexual pleasure; the term zandaqa refers to the belief in dualism, Manichaeism or atheism. The figure in the image is Yasir al-Habib, a Kuwaiti living in Britain and a controversial Twelver Shi’i polemicist. His nickname (which will often rhyme or alliterate in Arabic) is “khasir al-khabith,” which means (“Lost/Loser the Abominable”).

He is infamous for publicly insulting ‘Aisha and other companions of the Prophet who are condemned by Shi’a for not supporting ‘Ali ibn Abi Talib, the Prophet’s cousin and son-in-law, during the critical power struggles for succession following the Prophet’s demise in 632 C.E. Al-Habib has also slandered Twelver Shi’i scholars with whom he disagrees, including the late Lebanese grand ayatullah Muhammad Husayn Fadlallah.