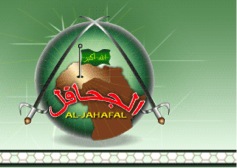 The image is the al-Jahafil forum logo. It consists of a globe or sphere with a brown African continent at its center, flanked by two crossed classical Arabian swords. The word “al-Jahafil” appears in Arabic (red) and transliterated in English (yellow). A green banner with the phrase “Allah Akbar” (“God is Greatest”) is placed somewhere in the border region between Algeria, Libya and Tunisia.

Jihadi visual propaganda uses images of the globe/planet earth in order to globalize localized issues and conflicts, as well as to articulate the global aims/nature of the jihadi struggle and/or particular groups. In the current image, it emphasizes the importance of the jihadi struggle in the Maghreb and East Africa and its global impact, as well as its association with other  theaters of jihad. The swords flanking the globe suggest a desire on the part of the designer to link the message to early Islamic history and the first generation of Muslims. Swords are seen as noble weapons that embody the religious purity, nobility and righteousness that is associated with the Prophet, his companions and their successful military campaigns. Thus, the swords help depict current jihadi activities as modern extensions of those campaigns and lend them an aura of legitimacy.

Group Name al-Jahafil (aka al-Jahafal) [legions or army corps]
Group Type Jihadist Group
Dominant Colors Green
Secondary Colors Red, Yellow, Brown
Language Arabic
Isolated Phrases / Mottoes / Slogans Allah Akbar
Image Number 0394
Groups Region of Operation Africa
Groups Country of Operation Algeria/Tunisia
Weapons Cold Weapons and Defensive Armor, Sword / Crossed Swords
Fire Light Rays / Light
Geopolitical Symbols Globe, Country / Regional Map, Non-country Flag, Symbol of party, movement or company
Geopolitical Analysis North Africa. Green flag. Al-Jahafil logo - green globe focused on brown (North) African continent with green takbir banner hoisted in or around Algeria; across it the word al-jahafil in red and flanked by two crossed Arabian swords.
Religious Textual References Takbir
Religious Symbols Black / White / Green Banners
Religious Symbols Analysis Green banner with text of takbir (phrase Allah Akbar)
Visual Themes Lastly, green (the color of the globe and of the background) is considered the traditional color of the Prophet Muhammad’s tribe, and has been adopted as a sacred color based on Qur’anic verses (76:21; 18:65-82) and a reliable hadith (prophetic tradition or report) that associates green with “universally good things.” Furthermore, the color is related to jihadi doctrine, as it is believed that while the corpses of martyrs lay in their graves, their souls are to be put into the bodies of green birds that drink from the rivers of Eden and eat from its fruit.