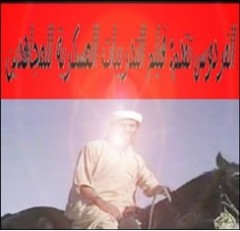 Religious leaders are seen as pious individuals who possess proper religious training and credentials, and thus are considered the chief religious ideologues of the jihadi movement. Their firebrand sermons and writings, distributed throughout the Muslim world, are key motivational tools used for recruiting and inspiring jihadi activists. It is therefore not surprising that such leaders are common motifs in jihadi imagery and are used as symbols of the religious piety espoused by the jihadi movement. Their images serve to religiously legitimize jihadi groups and promote activism along purely Islamic lines. As a strategic leader, the figure serves as an example of someone who is both a religiously pious individual and a militarily successful jihadi commander doing God’s work.

As might be expected, jihadi imagery makes prominent use of Usama bin Ladin, as well as other well-known leaders, such as Ayman al-Zawahiri, Abu Mus’ab al-Zarqawi, Mullah ‘Umar and Ibn al-Khattab. Here, Bin Ladin’s picture is used to symbolize resistance to unjust authority and dedication to jihad. The caption reads: “al-firdaws tuqaddim: film al-tadribat al-‘askariyya lil-mujahidin” (“Firdaws presents: a military training film for mujahidin [fighters].”). The fact that Bin Ladin is pictured riding a horse associates him with the tradition of horses in Islam, and particularly evokes Salafi conceptions of the first generation of Muslims. The horse is an important symbol in both pre-Islamic Arabia and Islamic culture, as evidenced by pre-Islamic poetry, hadiths (prophetic traditions or reports) and other genres of literature ascribing horses with the positive qualities of chivalry and bravery in battle. Horses are also symbolic of the first generation of Muslims and that generation’s successful military campaigns, and thus are often employed to evoke specific Salafi religious sentiments with regard to the military victories of Muhammad and his companions. The rider motif, which is also common in jihadi visual propaganda, emphasizes the element of human agency in jihad, and is a way to enhance the traditional symbol of a horse and flesh out notions of aggression and the call to jihad.