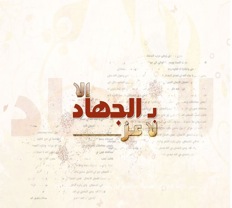 The caption in the image reads: “la ‘izz illa bil-jihad” (literally: “there is no dignity except in jihad.”) Though a rather common phrase in Arabic and in jihadi jargon in particular, it also happens to be the title of a famous nashid (religious a cappella song) performed by the singer Abu ‘Ali (see his Facebook page http://www.facebook.com/group.php?gid=78279364862). The red color of the word “jihad” in the caption is the color of fire, blood, passion, impulse  and danger. It is also fundamentally linked to the vital force, and to warlike qualities. A larger representation of the word “jihad” is watermarked in the background, also in red. The image appears on Facebook accompanied by a lengthy discussion of the strength of Islam and the power of Muslims that draws from various traditional and contemporary sources.