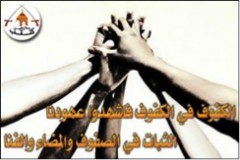 Several hands are grasped together in a team-like manner. Notice that each arm in the image seems to represent a slightly different race or, at the very least, skin color. This is an attempt to show a greater, pan-Islamic unity between Sunni Muslim peoples of all types. Images like this attempt to internationalize, or to pan-Islamize, the specific, national jihadi insurgency in Iraq. The slogan is a verse from a popular religious poem by ‘Abd al-Hakim ‘Abidin (1914-1976), former secretary general of the Muslim Brotherhood and brother in law to the founder Hasan al-Bana, which reads: “al-kufuf bil-kufuf fa-shhadu ‘uhudana  al-thabat fi al-sufuf wal-mada’ wal-fana” (“palms in palms, so bear witness to our promises, steadfastness is in ranks, as is perishing and passing”).