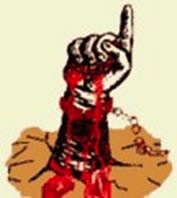 In Islamic tradition (as was the custom in pre-Islamic Arabia), blood or shedding blood symbolizes contrition and expiation, paying for a wrongdoing or sins with blood. In the jihadi visual propaganda however, blood or red usually symbolizes the act of martyrdom, and it is linked to the vital force and warlike qualities. Here, blood is seen dripping from a hand in a handcuff that has broken through hard ground and is pointing upward, presumably toward heaven. The image seems to symbolize the determination of the jihadi fighter and martyr to overcome powerful external hostile forces, as well as his capacity to do so. It should also be noted that the hand is pointing upward as a Muslim would do when articulating the shahada (Islamic testimony of faith holding that there is no god but Allah and that Muhammad is his messenger). This gesture is known as “Usbu’ al-shahada” (the finger of shahada) and is frequently used by jihadists.