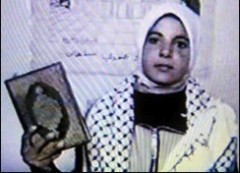 It is believed that Muslim martyrs will be highly rewarded in the afterlife for their sacrifice and that they hold a special position in heavenly paradise. It is therefore not surprising that martyrdom is a central theme in militant visual propaganda. Furthermore, women hold a powerful symbolic value in Islamic culture, as they are considered the bastion of their family’s honor. Thus, an image of a Muslim woman driven to sacrifice through militant activism aims to create an intense sense of shame and oppression in a male viewer that will facilitate in him a motivation to join the jihadi struggle. Moreover, images of Muslim women in many cases are designed to evoke sympathy for victims of enemy violence, and to provoke men into responding against the perceived injustice by joining the ranks of a given group.

This specific image is a representation of a figure with her last will and testament. Such images almost always include a weapon, a Qur’an and other symbolic items. The combination of symbolic elements highlights the religious importance of martyrdom and its violent nature, while also facilitating the group’s efforts to emphasize its commitment to the cause. The figure is ‘Andalib Taqataqa, who was killed at age twenty-three during a suicide attack operation in Jerusalem on 12 April 2002. She is standing against a white background designed to evoke notions of death in a state of purity, grief and mourning, as white is the color of shrouds.