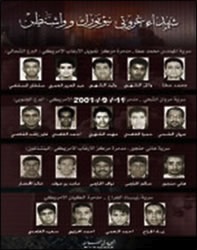 It is believed that Muslim martyrs will be highly rewarded in the afterlife for their sacrifice and that they hold a special position in heavenly paradise. It is therefore not surprising that martyrdom is a central theme in jihadi visual propaganda. Perhaps the most widely used group of martyrs in jihadist imagery is those who were involved with the 11 September 2001 attacks. Depictions of this group advertise the success of jihadi activism in general, and emphasize the religious rationalization of the attack for all potential audiences.

The caption at the top of the image reads: “shuhada’ ghazwatay new york wa-washington” (“martyrs of the two attacks on New York and Washington, D.C.”). The image includes the nineteen faces and names of those who carried out the attacks on 11 September against a faint background of the locations that were hit.  The hijackers are divided into four groups reflecting the four different planes and distinct targets on 9/11.