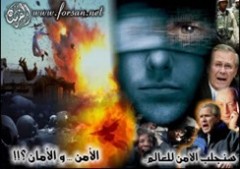 Global political leaders are characterized in jihadi propaganda as oppressors of Islam and enemies of the jihadi movement. They are depicted as the main obstacles to achieving the declared goals of the jihadi enterprise, namely, creating a societal framework governed by divine (Islamic) law, as opposed to man-made laws. This image combines a number of elements to establish this point. On the bottom right are the faces of shouting oppressors, i.e., the American leaders George Bush and Donald Rumsfeld; on the left are images of victims. In the center burns the fire of continued, promised resistance.

The text on the right is presented as a quote from the screaming figures, which reads: “sa-najlibu al-amn lil-‘alam” (“we bring security to the world”). The text on the left is a response exclaimed by the victims and their rescuer: “al-amn wal-aman?!!” (“security and safety?!!”). The combination of the text and the pictures of leaders offer a visual and textual reference to Bush’s “mission accomplished” speech of 1 May 2003 (see http://edition.cnn.com/2003/ALLPOLITICS/05/01/sprj.irq.bush.speech/index.html).