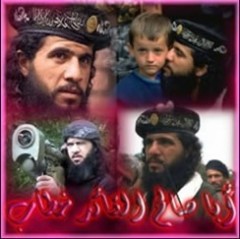 While participating in jihad imbues an individual with important religious credibility, death in battle distinguishes the deceased as a martyr. This distinction is particularly important for jihadi leaders.  With martyrdom, their personalities are elevated, within the jihadist community, to the status of mythical heroes, on par with famous historical warriors and the martyrs of Islamic tradition. Indeed, their martyrdom not only further legitimizes their cause and their actions, but in many cases the individuals become motifs in their movement’s visual propaganda.  In this image, the leader of Chechen mujahidin (fighters), Amir Khattab, also known as Habib ‘Abd al-Rahman, is immortalized in a collage of pictures with a blood red caption at the bottom that reads: “aba salih al-qa’id khattab” (“Abu Salih commander Khattab”).