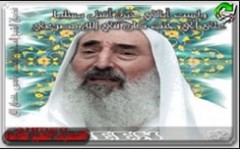 Here, the flowers in the background of Ahmad Yasin’s (the founder of Hamas) image represent vitality, as well as life and its incessant pace, and thus evoke notions of life after death, paradise and martyrdom. The use of green resonates the idea of God’s benevolence, and is symbolic of creation, life and sustenance. Moreover, it further emphasizes the religious aura of the image as green is considered the traditional color of the Prophet Muhammad’s tribe, and has been adopted as a sacred color based on Qur’anic verses (76:21; 18:65-82) and a reliable hadith (prophetic tradition or report) that associates green with “universally good things.”

A quote from a famous early Islamic qasida (poem) and hadith appears at the top of the image, saying: “wa-lastu ubali hina uqtalu musliman ‘ala ayy janb kana; fi Allah masra‘” (“and when I am killed as a Muslim, I don’t care in what way it happens; my fate is with God”).