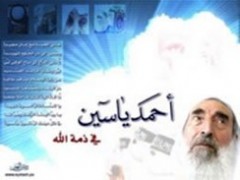 Religious leaders are seen as pious individuals who possess proper religious training and credentials, and thus are considered the chief religious ideologues of the jihadi movement. Their firebrand sermons and writings, distributed throughout the Muslim world, are key motivational tools used for recruiting and inspiring jihadi activists. It is therefore not surprising that such leaders are common motifs in jihadi imagery and are used as symbols of the religious piety espoused by the jihadi movement. Their images serve to religiously legitimize jihadi groups and promote activism along purely Islamic lines. As a strategic leader, the figure serves as an example of someone who is both a religiously pious individual and a militarily successful jihadi commander doing God’s work.

Here, the caption reads: “Ahmad Yasin fi dhimmat Allah” (“Ahmad Yasin is in Allah’s care”), signaling the figure’s death. The lengthy caption on the left of the image is blurred, but appears to be a nashid (poem). In Islam, clouds (which appear here behind the picture of Yasin) are a sign of Allah’s total inscrutability prior to creation. The cloud (sahab, pl. suhub) is also the bearer of rain and therefore bounty (khayr, which is also a synonym for rain), and is thus a sign of good things to come. Finally, the white of the clouds is the color of grief, mourning and shrouds. In the context of this image, the clouds evoke the notion of death in the state of purity, and thus the rank of martyr is assumed.