Dome of the Rock & Fighter 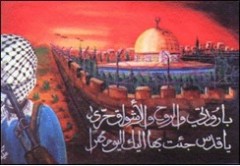 While Muslims across sectarian lines share a reverence for many holy sites, some sites hold special significance for certain groups. For instance, the Dome of the Rock (located in Jerusalem) is recognized and revered by all Muslims, as it was built in 692 A.D. by the Umayyid caliph ‘Abd al-Malik on the site where Muslims believe the Prophet Muhammad ascended to heaven in his mi‘raj (night journey). Indeed, it is considered the third holiest site in Islam after Mecca and al-Madina. At the same time, the Dome of the Rock is a powerful symbol of Palestinian nationhood.

The different components constructing the image, including the appearance of barbed wire, are an allusion to Israeli control of the Temple Mount and Palestinians’ aspirations to free Jerusalem and Palestine from the Israeli occupation. These references are also reflected in the caption, which reads: “barudati, wal-ruh, wal-ashwaq hurri, ya Quds, ji’tu bi-ha ilayki al-yawma mahran” (“My rifle, soul and longings are my freedom, O Jerusalem, I brought them to you today as a dowry.”). The caption is from a famous poem written by the poet Fu’ad a-Takruri.

Image of al-Aqsa Mosque & Dome of the Rock

Image with Lyrics from Famous Nashid