Image of Ahmad Yasin & Dome of the Rock 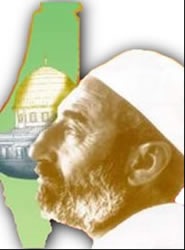 In the image, Israel and the Palestinian territories are represented as a single entity, without political or geographical context. Depicting a state or country alone, without bordering countries or bodies of water, emphasizes the national context and scope of that specific regional jihad. Notably, Israel, as a country or political entity, does not exist in this image.

Two major motifs are visible in the picture: the color green and the image of the Dome of the Rock. The green evokes God’s benevolence and powers of creation, and is the traditional color of the Prophet Muhammad’s tribe. Indeed, green has been adopted as a sacred color based on Qur’anic verses (76:21; 18:65-82) and a reliable hadith (prophetic tradition or report) that associates green with “universally good things.” The Dome of the Rock is recognized and revered by all Muslims, but it is also a powerful symbol of Palestinian nationhood. It was built in 692 A.D. by the Umayyid caliph ‘Abd al-Malik on the site where Muslims believe the Prophet Muhammad ascended to heaven in his mi‘raj (night journey), and it is considered the third holiest site in Islam, after Mecca and al-Madina. Because of its status in Islam, the Dome of the Rock is often used to code a message of inspiration for jihadi activism and the goal of martyrdom. Both motifs give this image an explicitly Islamic coloring, expressing both nationalistic and religious connotations. The figure in the image is Ahmad Yasin, deceased leader and co-founder of Hamas.