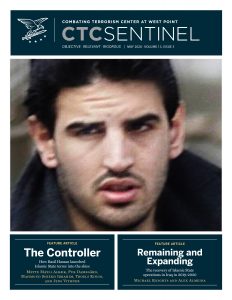 One painful lesson from the history of terrorism is just how dangerous one single capable international attack planner can be. Little has been written in English about Basil Hassan, a radicalized Danish engineering graduate of Lebanese descent who became one of the most dangerous international attack operatives within the Islamic State. In this issue’s first feature article, Mette Mayli Albæk, Puk Damsgård, Mahmoud Shiekh Ibrahim, Troels Kingo and Jens Vithner build on a two-year investigative report for the Danish public broadcaster DR to provide a detail-rich profile.

The authors write: “As the key figure in a drone procurement network that stretched from Europe through Turkey to Syria, [Hassan] was instrumental in furthering the Islamic State’s drone-warfare capabilities. As ‘the Controller’ behind the 2017 Sydney airline plot, he pulled the strings from Syria in directing one of the most ambitious and innovative terrorist plots ever seen.” There are claims Hassan was killed in the second half of 2017, but the authors note that Danish counterterrorism officials are still not certain that he is dead.

In our second feature article, Michael Knights and Alex Almeida find that “the Islamic State has recovered from its territorial defeats since 2017 to mount a strong and sustained resurgence as an insurgent force inside Iraq.” Their analysis of attack metrics from the past 18 months paints “a picture of an Islamic State insurgency that has regained its balance, spread out across many more areas, and reclaimed significant tactical proficiency.” The authors write that “now operating at the same levels it achieved in 2012, a number of factors suggest that the Islamic State could further ramp up its rural insurgency in 2020 and 2021. An input of experienced cadres from Syria, a downturn in Iraqi and coalition effectiveness, and now the disruption of a combined COVID and economic crisis will likely all feed into an escalating campaign of attrition against the Iraqi state, military, and tribes.”

May 2020 marks the third anniversary of the suicide bombing attack at the Manchester Arena in the United Kingdom. Two brothers from Manchester of Libyan descent, Salman and Hashem Abedi, were responsible for the attack. Following the conviction of Hashem Abedi in a trial that concluded two months ago in the United Kingdom, Eran Benedek and Neil Simon outline what is now known about the genesis of the attack, the brothers’ web of connections in a British-Libyan jihadi nexus, and their links to Islamic State extremists.

The 2017 Manchester Bombing and the British-Libyan Jihadi Nexus

Remaining and Expanding: The Recovery of Islamic State Operations in Iraq in 2019-2020

The Controller: How Basil Hassan Launched Islamic State Terror into the Skies

Reviewing Iran’s Proxies by Region: A Look Toward the Middle East, South Asia, and Africa