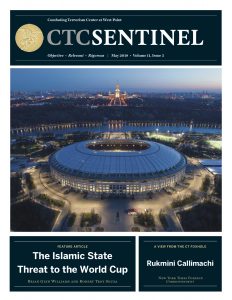 On June 14, 2018, the FIFA World Cup kicks off in Moscow with host Russia facing Saudi Arabia in the opening match. Brian Williams and Robert Souza warn in our cover article that the massive global media spotlight on Russia during the month-long tournament may incentivize jihadi terrorists to carry out attacks on Russian soil to retaliate for the country’s ongoing military intervention against Sunni rebel and jihadi fighters in Syria. Recent years have seen a string of jihadi terrorist attacks and plots in Russia, including the St. Petersburg metro bombing last year, as well as Islamic State plots and attacks targeting soccer venues in Europe. In recent months, propaganda outlets supportive of the Islamic State have released a torrent of threat messages against the tournament. According to Williams and Souza, potential threats include ‘self-starters’ inspired by Islamic State propaganda, foreign fighters returning from Syria and Iraq, and jihadis operating in the northern Caucasus and Tatarstan.

Our interview is with New York Times foreign correspondent Rukmini Callimachi, whose ongoing podcast series Caliphate documents the evolution and crimes of the Islamic State.

Daniel Milton and Brian Dodwell examine a female guesthouse registry obtained from Islamic State territory. The records on about 1,100 women who transited through the facility shed new light on the women who traveled from overseas to join the group, as well as challenge the dominant narrative in many media reports on the subject.

Bennett Clifford explores pro-Islamic State instructional material on the messaging and file-sharing platform Telegram, arguing that the dissemination of know-how on operational and cyber security may be equally as dangerous as instructional material related to carrying out attacks. Christian Jokinen draws on court records to outline the experiences of German foreign fighters who traveled to join al-Shabaab in Somalia earlier this decade. For most of them, the terrorist group turned out to be an unwelcoming host organization.

The Islamic State Threat to the 2018 FIFA World Cup

“Deutsche Schabab:” The Story of German Foreign Fighters in Somalia, 2010-2016