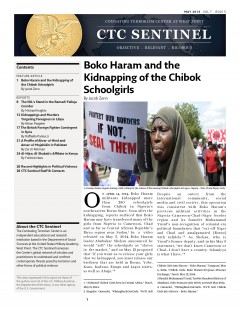 On April 14, 2014, Boko Haram militants kidnapped more than 250 schoolgirls from Chibok in Nigeria’s northeastern Borno State. This article analyzes Boko Haram’s area of operations along the Borno-Cameroon border with a focus on kidnappings, as they have become Boko Haram’s primary method of self-sustainable funding and are a tactic first introduced in northern Nigeria by Nigerian al-Qa`ida in the Islamic Maghreb (AQIM) militants who formed the faction Ansaru in 2012. The article reviews Boko Haram’s militant networks in Nigeria and abroad from 2003 to 2012, traces Boko Haram’s retreat to southern Borno and northern Cameroon after Nigerian President Goodluck Jonathan declared a state of emergency in 2013, and discusses how several factions may have come together to carry out the kidnapping in Chibok in April 2014. Finally, the article suggests that “Shekau” may have become a nom de guerre representing all Boko Haram leaders, including the real Shekau, in a confederation. This confederation pools resources together from all factions for major attacks, such as the one in Chibok, but disagrees over two main issues: terms for a cease-fire with the Nigerian government and the killing of Muslim civilians.

Boko Haram and the Kidnapping of the Chibok Schoolgirls

The ISIL’s Stand in the Ramadi-Falluja Corridor