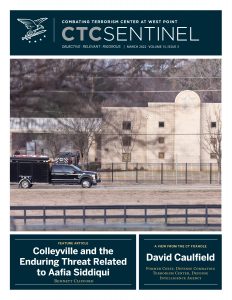 “The January 15, 2022, hostage crisis at a Jewish synagogue in Colleyville, Texas, resurfaced a longstanding jihadi cause when the armed hostage-taker demanded the release of Dr. Aafia Siddiqui, a Pakistani neuroscientist-turned-al-Qa`ida-operative currently serving an 86-year-sentence in an American prison for attempting to murder U.S. troops in Afghanistan,” writes Bennett Clifford in this month’s feature article, which looks at how her case continues to motivate jihadi terror plots in the United States. Clifford argues that “the factors that initially skyrocketed her case as a cause célèbre for jihadis have grown in importance. The jihadi movement, particularly in the West, has had a particularly intense focus on the plight of Western women jihadis behind bars during the past several years … [and] Siddiqui is the prototype for the ‘aseerat,’ the female prisoners of the jihadi movement who are constantly the subject of propaganda pushes, crowdfunding campaigns, and jihadi operational activities.”

Our interview is with David Caulfield, who served as Chief of the Defense Combating Terrorism Center at the Defense Intelligence Agency before his retirement earlier this year.

Daniel Heinke assesses that the Querdenken protest movement in Germany, which emerged in 2020 in opposition to government COVID-19 measures, is “apparently open to conspiracy theories and right-wing extremism” and has become “a serious threat to public security.” He notes that not only did Querdenken protestors attempt to storm Germany’s parliament building in August 2020, prefiguring the January 6 U.S. Capitol riot, but an alleged 2021 plot to assassinate Saxony’s premier was “reportedly fueled by corona-skeptic grievances and apparently had linkages to the broader Querdenken movement.” He writes: “The threat posed by the movement is that it can fuel anti-government sentiments and thus may form a gateway for the acceptance of more extremist views and ultimately for the belief that resorting to violence may be acceptable or even necessary to defend rights.”