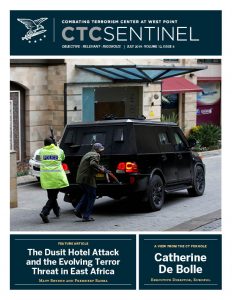 In our cover article, Matt Bryden and Premdeep Bahra trace the evolution of the jihadi terrorist threat in East Africa over the last three decades. They argue that al-Shabaab’s January 2019 attack on the Dusit D2 luxury hotel compound in Nairobi, Kenya, “brought together three strands of al-Shabaab’s organizational DNA: its Somali provenance, its ideological affiliation with al-Qa`ida, and its growing cohort of trained, experienced East African fighters. The successful combination of these traits in a single operation suggests that al-Shabaab’s longstanding ambition to transcend its Somali origins and become a truly regional organization is becoming a reality, representing a new and dangerous phase in the group’s evolution and the threat that it poses to the region.”

Our interview is with Catherine De Bolle, the Executive Director of Europol, who previously served as Commissioner General of the Belgian Federal Police between 2012 and 2018.

Graham Macklin outlines what is now known about the Christchurch terrorist attacks. He writes: “In the space of 36 minutes on March 15, 2019, it is alleged that Brenton Tarrant, an Australian far-right extremist, fatally shot 51 people in two mosques in Christchurch in the deadliest terrorist attack in New Zealand’s history. What was unique about Tarrant’s attack—at least insofar as extreme-right terrorism is concerned—is that he livestreamed his atrocity on Facebook and in doing so, highlighted the Achilles heel of such platforms when faced with the viral dissemination of extremely violent content.” Joana Cook and Gina Vale provide an updated assessment of the numbers of foreign men, women, and minors who traveled to or were born in the Islamic State, examine the proportion that have returned ‘home,’ and outline the continuing challenges foreign women and minors affiliated with the Islamic State pose to the international community. Robin Simcox assesses the terrorist threat from “frustrated travelers” in Europe by examining the 25 plots (eight of which resulted in attacks) by such individuals since January 2014.

The Christchurch Attacks: Livestream Terror in the Viral Video Age

From Daesh to ‘Diaspora’ II: The Challenges Posed by Women and Minors After the Fall of the Caliphate

When Terrorists Stay Home: The Evolving Threat to Europe from Frustrated Travelers