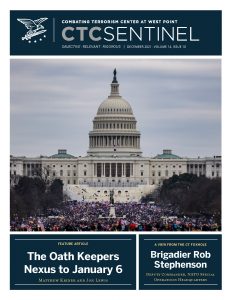 From the Editor
It has been almost a year since the events of January 6 shook the United States. In this month’s feature article, Matthew Kriner and Jon Lewis profile the Oath Keepers, an extreme far-right, anti-government group that allegedly played a key role in the insurrection at the U.S. Capitol. They write: “Since its inception in 2009, the group has used a warped sense of patriotism, loose enforcement of laws surrounding paramilitary activity, and America’s founding revolutionary spirit to justify anti-government mobilization. It consistently walked the edge of political violence before taking part in the January 6 insurrection. While the group claims to be ‘guardians of the republic,’ its principal target is the government itself—particularly entities representing perceived federal government overreach and vectors for tyrannical forces to suppress Americans’ natural rights.”

With concern still high over the threat posed by the violent far-right in the United States and other parts of the world, H.E. Upchurch outlines the evolution of the “skull mask” neo-fascist network. Upchurch writes: “The backbone of the ‘skull mask’ transnational neo-fascist accelerationist network—whose nodes include terror groups such as Atomwaffen, the Base, and Feuerkrieg Division—is a group of organizations that grew out of Iron March, a neo-fascist web forum that was active from 2011 to 2017. The history of the Iron March network shows that violent extremist movements can develop from online communities even in the absence of a territorial base and without regular in-person contact between members.”

Finally, Sofia Koller and Alexander Schiele examine the criminal justice approach to prosecuting women who left Germany during the last 10 years to join terrorist organizations in Syria and Iraq, including the Islamic State, and returned. They write: “Germany is one of the only countries that has successfully utilized aspects of international law to legally prove membership in a terrorist organization, especially in the case of returned women. It might provide a useful model for other countries in developing more effective prosecution of returnee cases in their respective legal systems.”