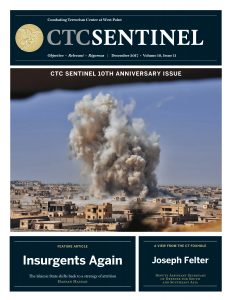 We’re proud to be publishing the 10th anniversary issue of CTC Sentinel. In the inaugural December 2007 issue, then Director of the Combating Terrorism Center Joseph Felter introduced the new publication with a favorite phrase of the late General Wayne A. Downing, “Who thinks wins.” Felter is now the Deputy Assistant Secretary of Defense for South and Southeast Asia and is the subject of our interview this month. “We wanted CTC Sentinel to be a resource to the academic, scholarly, and policy community … so we designed CTC Sentinel to include both high-quality scholarship from leading scholars as well as articles grounded in practitioner insights,” he recalls. “[It] has truly met and exceeded our hopes for it.” A great deal of credit for this is due to founding editor Erich Marquardt, the journal’s editorial board over the years—now led by Colonel Suzanne Nielsen, Lieutenant Colonel Bryan Price, and Brian Dodwell—as well as Brigadier General Cindy Jebb, the Dean of West Point, who has been a longtime champion of the publication.

There are still very significant challenges to think through. Hassan Hassan warns in this month’s cover article that the Islamic State is now attempting a resurgence in the border region between Iraq and Syria, having conserved forces for the same kind of attritional insurgency that led to its regeneration after its near-defeat in the late 2000s.

This year has seen four international terror attacks involving ethnic Uzbeks, including a truck attack on New York City’s West Side Highway in October. Goktug Sonmez outlines how radicalization among Central Asians is becoming a growing international security concern. Johannes Saal examines what is known about what appears to be a new Islamic State external operations hub in Libya and the spokes connecting it to radical networks in Europe. Ryan Cummings outlines the evolving relationship between Boko Haram and al-Qa`ida and argues there are indications al-Qa`ida is trying to bring the group back into its fold.

Insurgents Again: The Islamic State’s Calculated Reversion to Attrition in the Syria-Iraq Border Region and Beyond

A View from the CT Foxhole: Joseph Felter, Deputy Assistant Secretary of Defense for South and Southeast Asia

A Jihadi Takeover Bid in Nigeria? The Evolving Relationship between Boko Haram and al-Qa`ida