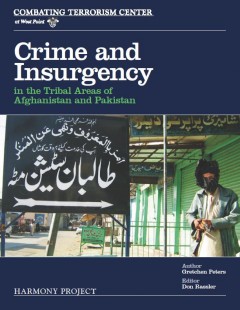 Insurgent and terror groups operating in the tribal areas of Afghanistan and Pakistan are deepening their involvement in organized crime, an aspect of the conflict that at once presents enormous challenges and also potential opportunities for Coalition forces trying to implement a population‐centric counterinsurgency strategy.  To gain a better understanding of these issues, Crime and Insurgency in the Tribal Areas of Afghanistan and Pakistan maps out how key insurgent groups engage in illicit activity in strategic areas, tracks how their involvement in this activity is evolving, and illustrates how insurgent and terror groups impose themselves on local communities as they spread to new territory.  The report’s findings are presented through a series of short and anecdotal case studies drawn from field research, primary source documents and open-source reporting.  It is hoped that this report will bring some clarity to an extremely complex phenomenon and prove useful to those developing policies and plans for the Afghanistan/Pakistan region.

Letter from Taliban Chief in Kajaki

This Pashto language document, issued to local truck drivers and shop keepers, is from Haji Khan, the Taliban chief in...

This document is a Taliban night letter from 2009 that was distributed in Paktika Province, Afghanistan. The document advises the...

2007 Version of the Taliban’s Rules of Jihad

This Pashto language document is a set of rules that was issued by Taliban, that all the mujahedin under the...

Warning to Local Commanders and Mix of Night Letters

This set of Pashto language documents includes lists of phone numbers and individuals, potential communication from Taliban commission in Kandahar...

Logbook of Measurements and Potential Values of Opium

This Pashto language logbook, obtained by Coalition troops in 2009, appears to catalogue local measurements and values of opium either...

This set of documents, captured in Kandahar in 2009, is associated with Haji Abdul Ghani Mohammad, a known Taliban financier...