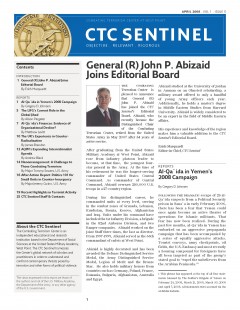 In late July 2007, Algerian press outlets reported on the defection of a former member of al-Qa`ida in the Islamic Maghreb (AQIM). This individual, named Abdelkader Ben Messoud, alias Abu Daoud, was a former senior member of the group’s wing operating in the Sahara, and the account he related to journalists depicted an organization riven by disputes about the group’s new direction [1]. According to Abu Daoud, one of the key sources of dissent within AQIM’s ranks was over the decision by the group’s amir, Abdelmalek Droukdel, alias Abu Mus`ab `Abd al-Wadud, to merge with al-Qa`ida in September 2006 and thus redirect the group’s focus from a nationalist to an internationalist agenda.

The proceeding seeks to determine the balance AQIM has found between these two competing views. To do this, the article presents the findings from two studies: a quantitative content analysis of the group’s statements, and a data analysis of attacks by the group. The article will proceed by providing a brief synopsis of AQIM, its legacy and the merger with al-Qa`ida. Following this, the essay will outline the methodology and present the findings from each study. Finally, context and a threat assessment will be provided setting the findings against the current environment in North Africa.

The Islamist opposition to the current Algerian government, of which AQIM is only a recent manifestation, has its roots in the late 1980s and early 1990s when the Islamist movement, led by the Islamic Salvation Front (FIS), was poised to win the majority vote in the 1991 general elections. Rather than accept a ruling Islamist party, the Algerian military nullified the elections in January 1992, touching off a period of hostilities, initially led by the Armed Islamic Group (GIA), that has endured almost uninterrupted [2].

While the source of the violence was a national political event, the campaign waged by the GIA through much of the 1990s took on an international element. Algerian groups, such as the GIA, conducted various types of operations abroad, ranging from procurement to plotting and conducting attacks, especially within Europe. Throughout the conflict and despite incorporating a number of veteran Afghan mujahidin, the rhetoric and operational orientation of the movement largely remained focused on effecting change in the Algerian polity. After 2001, however, elements within the Algerian jihadist movement began to exhibit signs of a shift toward a more international orientation, manifesting in professions of allegiance to Usama bin Ladin and the al-Qa`ida leadership [3].

This shifting dynamic was accentuated in September 2006 when Ayman al-Zawahiri announced the official merger between al-Qa`ida and the Algerian Salafist Group for Preaching and Combat (GSPC). While this event and the group’s subsequent renaming to al-Qa`ida in the Islamic Maghreb indicated al-Qa`ida’s growing interest in North Africa, it also pointed to the GSPC’s shifting focus away from nationalist ambitions toward a more internationalist agenda. What remained to be determined was the balance the GSPC’s and later AQIM’s leaders would strike between these competing views.

For the current study, 33 statements issued by the GSPC and AQIM from March 2005 through March 2008 were reviewed and coded for content. The statements were collected from the Open Source Center (OSC) and the Site Institute, and each statement was coded for specific references to either national or international terms. Examples of national terms include references to Algeria’s government, security services and any other terms that indicate a desire to change the national polity or which respect national borders. This view aligns with the nationalist ambitions of groups such as the GIA and the GSPC. References to foreign governments and people were coded individually and in the aggregate are considered to fall within an internationalist perspective, a perspective which roughly comports with the vision of al-Qa`ida and the global jihadist movement. Important components of this view are a focus on attacking the “far enemy,” while rejecting the Westphalian state model and national borders.

The analysis also relied upon two key assumptions. First, it is assumed that statements issued by the group, especially its key leadership, are indicative of the overall emphasis placed on key strategic issues; the frequency of terms used is assumed to correspond to the group’s priorities and in total would indicate whether the group leans more toward a nationalist or an internationalist campaign. When compiled, the data should portray the evolution of the group’s priorities and be informative as to AQIM’s future direction. The second assumption underlying the analysis is that Abu Mus`ab `Abd al-Wadud has remained the amir of the organization since before March 2005 and that he speaks for the majority of the group’s members. Significant doubt has been cast on this assumption in recent months, as several reports from the Algerian media have suggested that al-Wadud was deposed in 2007 [4]. These reports, however, appear to be misleading since al-Wadud continued to be featured on AQIM’s website through December 2007 and on videos released in spring 2008 [5].

The findings from the content analysis represent a group that, while still predominately focused on Algeria, is nonetheless shifting its focus from a nationalist to an internationalist agenda, as illustrated in Figure 1. The most dramatic shift can be seen in the group’s identification of the West and Israel. Prior to the September 2006 merger with al-Qa`ida, AQIM makes specific mention to Algeria just under five times more than Israel and Western countries. In the period following the merger, that figure is cut almost in half, and since September 2007 the ratio of references to Algeria versus the West and Israel stands at just two to one, a 48% reduction since before the merger. This is a dramatic strategic shift for the organization as a whole and indicates an overall process of realigning the organization’s objectives to comport with al-Qa`ida’s own views.

To provide the findings from the content analysis with context, a data analysis was conducted of attacks by both the GSPC and AQIM from 2006 through March 2008. The methodology employed for the data analysis was similar to that of the content analysis. A dataset of 96 attacks by both the GSPC and AQIM was compiled from the U.S. National Counter-Terrorism Center’s Worldwide Incidents Tracking System (WITS). The coding principals employed were the same as in the content analysis. The dataset was increased to a total of 107 with the inclusion of events from 2008 by the author. It must be noted that one inherent drawback to using the WITS data is that it largely omits failed and disrupted plots, such as the December 2006 plot in Tunis, Tunisia. Rather, these data portray only those attacks which were both successfully executed and reported in the media.

The results of the data analysis similarly portray a group that is shifting its targeting preferences from nationalist to internationalist personnel and assets, as illustrated in Figure 2. Of the 33 events which occurred prior to the GSPC’s merger with al-Qa`ida, 29 targeted national assets against just one international asset [6]. Since the September 2006 merger, however, this ratio of nationalist to internationalist attacks reduces to seven to one. Since September 2007, the same month in which Ayman al-Zawahiri called for the expulsion of Western influence from the Maghreb, the trend accelerated to the point that now one in three attacks by the group targets an international asset. Examples of such attacks include the December 2007 bombing of the UN building in Algiers, and the February 2008 kidnapping of two Austrian tourists in Tunisia.

Implications of the Data

Both the content and data analyses demonstrate the escalating emphasis on internationalist targets, and in the aggregate confirm the notion that AQIM is moving closer into alignment with al-Qa`ida’s worldview. The implications of the findings in this article are significant for the other North African countries as well. Countries such as Tunisia and Mauritania, upon which AQIM has focused in the past, are likely to become increasingly popular targets. In Tunisia, AQIM has devoted attention specifically to the tourism industry, which is an important element of that country’s economy. This point was made salient most recently in the ongoing hostage crisis involving two Austrian tourists. In Mauritania, it appears to be not only tourism but also that country’s diplomatic relations with Israel that draw AQIM’s ire. Two months prior to the February 2008 attack on the Israeli Embassy in Nouakchott, AQIM released a statement claiming an attack on the Mauritanian military: “This operation has come at a time during which the sky of our beloved Nouakchott is still polluted with the fluttering of the Israeli flag” and while the Mauritanian government continues to support the “Crusaders” militarily and by hosting the Dakar Rally [7].

Additionally, aside from the growing threat to Western interests in North Africa, AQIM’s statements indicate an intention, though not necessarily a capability, to strike within Europe, a point which has been echoed by numerous European security officials [8]. The EU’s counter-terrorism coordinator, Gilles de Kerchove, noted recently that Europe faces a “real threat” from “the rallying to al-Qaeda of groups like the Salifist Group for Preaching and Combat (GSPC) and the Libyan Islamic Fighting Group” [9]. Thus, while AQIM continues to maintain a strong commitment to effecting change within Algeria, the growing internationalist rhetoric and shifting targeting preferences indicate that the group is in the process of realigning its priorities to be in accordance with al-Qa`ida’s strategy of targeting the “far enemy,” and therefore presents a greater threat to the West.

This article has set out the findings of a quantitative content analysis of GSPC and AQIM rhetoric between March 2005 and March 2008. In addition and to provide context, a data analysis of the group’s attacks was presented. In sum, the analyses show the group’s rhetoric has focused proportionally more on the international arena than have its successful attacks. Nonetheless, the trends in both analyses show that since the September 2006 merger with al-Qa`ida and despite reportedly deep internal dissent, the group has progressively shifted to a stronger focus on an internationalist agenda. This transition has altered security in North Africa and may have implications for the West as well.

Andrew Black is the Managing Director of Black Watch Global, an intelligence and risk management consultancy providing insight and analysis on emerging threats for public and private sector clients. Mr. Black has worked extensively in counter-terrorism and homeland security as a specialist on Middle Eastern and African security affairs and has spoken at several industry and counter-terrorism conferences.

[6] Four events were coded as “not applicable,” as they were against former GSPC members and their families.