When to Confront Mahdists 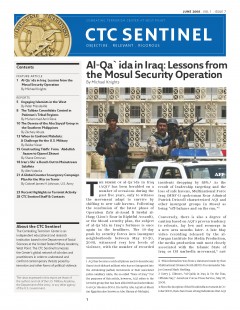 One of the most extraordinary uses of U.S. air power in Iraq took place on January 18 and 19, 2008, when Iraqi forces involved in armed confrontations in Basra and Nasiriyya called in air support and U.S. jets flew over the battlefields in a show of support. In itself, this kind of action may seem unremarkable; however, the identity of the group targeted by the Iraqi forces raises important questions about the type of “anti-terrorism” operations into which U.S. forces in Iraq are getting drawn. In this case, the focus of the offensive was a group whose ideology sets it apart from followers of mainstream Shi’ism primarily because it believes the Hidden Imam—the Shi`a leader who disappeared in 874 AD but who theoretically still holds all power among the Shi`a—may be about to appear [1].

This was not the first time U.S. forces have backed up the Nuri al-Maliki government against internal enemies who subscribe to unorthodox interpretations of Shi`a Islam. One year earlier, in January 2007, a similar group had been targeted in the Najaf area. In this prior confrontation, hundreds of people lost their lives and scores were arrested. The Iraqi government accused the “cult members” involved—also known as Jund al-Sama’ or the “Soldiers of Heaven”—of having planned an attack on Najaf in which leading members of the clergy would be liquidated. Independent researchers familiar with the (still undisclosed) court records of the subsequent trial against the group, however, dismiss it as a farcical attempt to implicate political enemies in criminal activity. Once more, the group singled out by the Iraqi government was characterized by messianic beliefs related to the return of the Hidden Imam, the Mahdi [2].

It is likely that the Iraqi government will make similar requests for military assistance in the future. Before taking action against discontented Shi`a, however, the U.S. armed forces should assess the relevant theological issues and whether actual security risks are involved.

The Background of the Ahmad al-Hasan Movement

Soon after the 2008 incident, the two Mahdist groups became mixed up in the Western media. There is, however, reason to believe that the cells that were targeted in 2008 had developed quite independently of the Najaf group. Styling themselves as “followers of Ahmad al-Hasan al-Yamani,” the group had a visible presence in Basra since at least 2005 [3]. In the subsequent period it remained active in Basra and the far south, gaining adherents among former Sadrists and religious students, especially in Basra and Nasiriyya. In the wake of the 2007 clash in Najaf, the group vigorously distanced itself from the Jund al-Sama’ group, claiming they disagreed over interpretations of how and when the Hidden Imam would reappear [4].

In a statement dating from around January 19, 2008, which was accessible for a few hours on the group’s website, www.almahdyoon.org, before it was closed down, the followers of Ahmad al-Hasan gave their side of the story behind the confrontation with the Iraqi government [5]. In it, they deplore the accusations by government sources of links to the Jund al-Sama’ movement and former Ba`athists. They present their movement as essentially a fundamentalist Shi`a one, critical of the ulama, but focusing on a “return to the sources,” “the holy books [the Qur’an], the traditions of the Prophet and the ‘heritage’ (turath) of the Shiites.” Their aim is to prepare for the return of the Mahdi, “which has been promised both in Islam, Christianity and Judaism.” As an example of comparable haraka islahiyya (reformist movements), they draw attention to the Jehovah’s Witnesses in the West. It is noteworthy that in this declaration they play down another theme that had been prominent in previous public pronouncements: the supposed imminence of the return of the Mahdi, and the concomitant claims to a special, divine role for their leader, Ahmad al-Hasan, as the “guardian” of the Mahdi [6].

As for the accusations of targeting the ulama, the group members admit that they do not support the higher clergy among the Shi`a, but at the same time they offer a theoretically grounded explanation for this. In their view, the standard Shi`a practice of total surrender to a qualified cleric (mujtahid) in questions of Islamic law is misguided. “Emulating a cleric” (taqlid), they say, is not wajib (obligatory), and the payment of religious taxes to anyone other than the infallible imams (of whom only the twelfth and hidden one is still alive) would be wrong. According to the group, rather than consulting the ulama, the people should read the Qur’an for themselves in order to “find out about the truth.” They ask: “Is this really deviation (inhiraf)?” The real reason for them being targeted, in their view, is political, and they single out `Abd al-`Aziz al-Hakim of the Islamic Supreme Council for Iraq for having instigated the dispatch of a special force from Baghdad to the south to have them arrested.

The rhetoric of the followers of Ahmad al-Hasan clarifies why the leading Shi`a ulama may consider them a threat. The very fundament of power of the Shi`a ulama is the dichotomy present in Usuli Shi’ism (the main, orthodox branch of Shi’ism) which divides all Shi`a into two categories: a tiny elite of clerics qualified to interpret the Islamic law (mujtahidun), and the vast majority of people unqualified in jurisprudential matters, called muqallids because they have to “emulate” a mujtahid. This dichotomy crystallized in the 18th century and has since proven remarkably durable. Any ideas about “people going back to the sources themselves” (sometimes described as “neo-Akhbarism,” after the Akhbari school which originally was the main enemy of the Usulis) are seen as a direct challenge to it; it could potentially lead to conditions such as those seen in Sunni Islam, where the established clergy lost control completely in the late 19th and 20th centuries when a similar “back to the sources” trend became ascendant.

The clearest historical parallel to what is currently going on inside Iraq’s Shi`a community can be found in the situation in Iraq’s holy cities in the mid-19th century. In that period, numerous similar challenges against the monopoly of the Usuli Shi`a clergy were launched: Shaykhism, Babism and Baha’ism. History shows that there were hardly any limits to what the orthodox ulama would do to fend off these challenges. For example, in the 1820s, in an attempt to have the founder of the Shaykhi school (Ahmad al-Ahsa’i, who claimed to have access to the Hidden Imam) executed or deported, Shi`a ulama contacted the Sunni authorities in Baghdad, alleging that the Shaykhi leader was guilty of having cursed the three first caliphs (a common Shi`a practice) [7]. Similarly, in 1846, when the Babi movement emerged (and its leader presented claims to have privileged access to the Mahdi as a “gate” or bab, not entirely unlike the “guardian” role claimed by Ahmad al-Hasan), Najaf ulama showed no hesitancy in facilitating his arrest and handing him over to Ottoman authorities in Baghdad with a demand for the death penalty [8].

One competing interpretation of the appearance of Mahdist groups in contemporary Iraq that should be rejected immediately is that of an “Iranian conspiracy.” It is true that there are interesting parallels between the stronger emphasis on Mahdism in both countries in recent years. Yet, to see Iranian hands behind groups like Ahmad al-Hasan would be a mistake in two ways. In the first place, many of his followers come from some of the most anti-Iranian circles in Shi`a Iraq, and Hasan himself has attacked Iranian Supreme Leader Ayatollah Khamenei, much in the way he has attacked Grand Ayatollah Ali al-Sistani, and has specifically called for his abdication [9]. Second, this would overlook the considerable historical roots of Mahdism in the far south of Iraq. Similar movements have mushroomed in the south and the adjacent areas in Iran and the Arabian Peninsula for centuries, starting with revolutionary movements and slave revolts in the early centuries of Islam, followed by the emergence of Mahdist principalities such as the Mushasha dynasty in the Iranian-Iraqi borderlands in the 15th century, and culminating with the triad of Shaykhism, Babism and Baha’ism in the 19th century—the first of which had its roots in the Shi`a areas of al-Hasa (in the eastern parts of modern-day Saudi Arabia) and later gave birth to a substantial Shaykhi community in Basra that still exists today [10].

Challenges for the U.S. Armed Forces

The fundamental question today is what purpose the U.S. armed forces are serving by volunteering to adjudicate on these rivalries in the name of the “war on terrorism.” The historical parallels suggest that this is first and foremost a theological dispute about the timing of the return of the Mahdi in which the stronger party (the Iraqi government, under pressure to be seen as the upholder of orthodox Shi’ism and desperately trying to reach out to the higher-ranking clergy of Najaf) concocts inflated terrorism-related charges against a possible threat to the monopoly of the established clergy.

Just as the Shi`a ulama in the 19th century quite unscrupulously called on the Ottoman state to deal with Shi`a dissenters by appealing to a language the Ottomans would understand (that of Sunni orthodoxy), the Iraqi government seems to have no qualms in enlisting U.S. support for combating Shi`a who dare challenge the orthodox mainstream, again using language that would be familiar to the military power whose services are sought (terrorism, or al-Qa`ida involvement). Details about the recent operations against Iraqi Mahdists remain sketchy, but the timing (in both cases during the Shi`a holy month of Muharram) strongly suggests that this was primarily an attempt by Shi`a leaders to enforce sectarian orthodoxy during testing times. If similar requests for U.S. military help should materialize in the future—and reports out of Iraq suggest that there is no shortage of discontented Shi`a prepared to explore the Mahdist option—it would be prudent for the U.S. armed forces to sort out theological and security-related issues before the label of “terrorism” is taken at face value.

Dr. Reidar Visser is a Research Fellow at the Norwegian Institute of International Affairs in Oslo and editor of the Iraq website www.historiae.org. His writings on the subject of federalism and regionalism in southern Iraq and Iraqi nationalism among the Shi’ites include the monograph Basra, the Failed Gulf State: Separatism and Nationalism in Southern Iraq (Transaction Publishers, 2006) and, edited with Gareth Stansfield, An Iraq of Its Regions: Cornerstones of a Federal Democracy? (Columbia University Press, 2007). Dr. Visser studied history and comparative politics at the University of Bergen and received a Ph.D. in Middle Eastern Studies from the University of Oxford.

[2] Ali Allawi, “Millenarianism, Mahdism and Terrorism: The Case of Iraq,” presentation at The Jamestown Foundation, October 9, 2007.

[3] An early, peaceful demonstration by this group was covered by al-Manara on August 2, 2005.

[6] The more assertive position is described for instance in a statement by Ahmad al-Hasan dated 21 Rabi al-Thani 1426/May 30, 2005, published on www.almahdyooon.org.