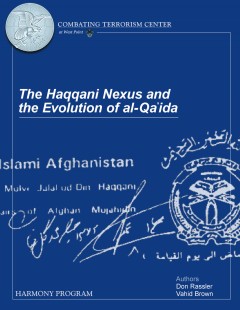 The CTC’s most recent report “The Haqqani Nexus and the Evolution of al-Qa’ida” has recently been highlighted by a number of different media organizations.  Select summaries and links are provided below to coverage of the report.

A recent article in the Washington Post’s, Checkpoint Washington blog, which focuses on issues of diplomacy, intelligence and military affairs highlighted the CTC’s recently released report on the Haqqani network.   An excerpt from the review is below. To read the whole review click here.

Today, the Haqqani network is considered the most dangerous insurgent force fighting U.S. troops in eastern Afghanistan. It has maintained ties with militant organizations spanning the border, including al-Qaeda, part of an alliance that has helped make the Haqqani group particularly worrisome for U.S. officials.  Still, according to a new and deeply researched study, the U.S. assessment of that alliance and of Haqqani’s activities in Afghanistan may very well underestimate the role that the network has played in the spread of global jihad, as well as the danger it poses to American interests more broadly.  Using old jihadist magazines and digital videos as resources, the study from the Combating Terrorism Center concludes that since the 1980s, the Haqqani network has provided not only safe haven for al-Qaeda fighters, but training, propaganda support, networking opportunities and other resources….

A new study says a key faction of the Taliban has been far closer to al-Qaida than some previous analyses have suggested, raising fresh questions about Pakistan’s alleged support for terrorist groups and the prospects for peace negotiations on Afghanistan…. Rassler notes that Pakistan has put forward the Haqqani network for a role in any potential talks on a political settlement in Afghanistan. He says the Afghan and U.S. governments will have to tread very carefully.  “While the Haqqanis might be central to Pakistan, given their history with al-Qaida, it really illustrates that U.S. and Pakistani goals for the future of Afghanistan are actually in tension. And this is challenging for our efforts to withdraw from the region as well as reconciling with the Taliban,” Rassler says. “Any decision to reconcile with the Haqqani network really needs to be informed by the deep history and operational integration between the Haqqanis and al-Qaida, and more recently the Pakistani Taliban.”

In a post on 19 July 2011, Jihadica’s Will McCants highlighted the CTC’s recent report on the Haqqani network and the evolution of al-Qa’ida.  “Don Rassler and Vahid Brown have written one helluva report on the Haqqani network, the folks who have been providing aid and sanctuary to AQ Central for decades. Based on thousands of pages of primary source documents–many not previously released to the public–Rassler and Brown explain how the Haqqanis did (and do) it.  Still not sure you want to read it?  The authors borrow network analysis tools from Renaissance Studies to show how the Haqqani network functions. C’mon.”