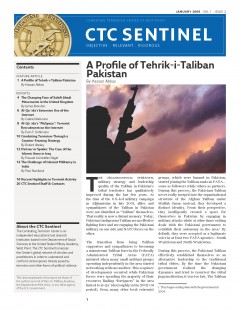 A Profile of Tehrik-i-Taliban Pakistan

The organizational strength, military strategy and leadership quality of the Taliban in Pakistan’s tribal territories has qualitatively improved during the last few years. At the time of the U.S.-led military campaign in Afghanistan in late 2001, allies and sympathizers of the Taliban in Pakistan were not identified as “Taliban” themselves. That reality is now a distant memory. Today, Pakistan’s indigenous Taliban are an effective fighting force and are engaging the Pakistani military on one side and NATO forces on the other.

Combating Terrorism Through a Counter-Framing Strategy

The Challenge of Islamist Militancy in India

The Changing Face of Salafi-Jihadi Movements in the United Kingdom

Al-Qa`ida’s Extensive Use of the Internet

A Profile of Tehrik-i-Taliban Pakistan