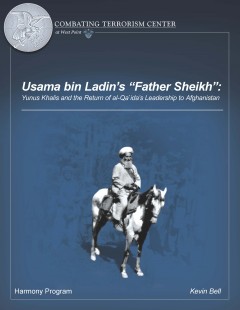 The purpose of this report is to shed light on the poorly understood role that Yunus Khalis played in modern Afghan political history. This research is based on an analysis of several under‐studied primary sources in Pashto and Persian that offer unique insight into Khalis’s life and work. Although he was an author, teacher, and the leader of the Hizb‐e Islami (Khalis) mujahidin political party during the Soviet Afghan War, today Yunus Khalis is most often discussed in the context of his personal relationships with Jalaluddin Haqqani and Usama bin Ladin. There is little doubt that Khalis was on friendly terms with these two men. However, Haqqani had a far more visible effect on the growth of al‐Qa`ida than Khalis, and the latter apparently had major political disagreements with Bin Ladin. This report argues that Yunus Khalis’s historical impact is better found in his work as an activist intellectual and his refusal to take sides in the Afghan Civil War than in his relatively peripheral contact with Usama bin Ladin.