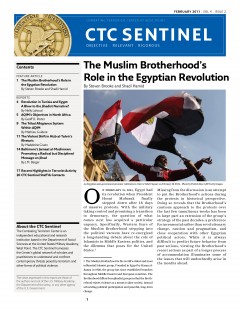 On February 11, 2011, Egypt had its revolution when President Hosni Mubarak finally stepped down after 18 days of massive protests. With the military taking control and promising a transition to democracy, the question of what comes next has acquired a particular urgency. Specifically, Western fears of the Muslim Brotherhood stepping into the political vacuum have re-energized a longstanding debate about the role of Islamists in Middle Eastern politics, and the dilemma that poses for the United States.[1]

Missing from the discussion is an attempt to put the Brotherhood’s actions during the protests in historical perspective. Doing so reveals that the Brotherhood’s cautious approach to the protests over the last few tumultuous weeks has been in large part an extension of the group’s strategy of the past decades: a preference for incremental rather than revolutionary change, caution and pragmatism, and close cooperation with other Egyptian political actors. While it is always difficult to predict future behavior from past actions, viewing the Brotherhood’s recent actions as part of a longer process of accommodation illuminates some of the issues that will undoubtedly arise in the months ahead.

The Brotherhood in Power?
Any attempt to forecast the behavior of the Brotherhood in power should rest on realistic assumptions of the group’s capabilities and intentions. The group’s electoral dominance has been overstated, largely due to regime manipulation and stifling restrictions imposed on other Egyptian political actors. Allowing the Brotherhood to emerge as the de facto face of the Egyptian opposition was crucial for Mubarak’s attempts to convince Western audiences that he was all that stood in the way of an Islamist takeover. As a leading member of the Brotherhood said in Cairo in 2006, “if there were free elections with all groups competing and debating, we would get maybe 25% of the vote. Parties cannot compete under a police state.”[6]

The Brotherhood may be Egypt’s largest opposition group with an estimated 300,000 members and millions of sympathizers. The group is particularly strong with the urban middle class, among doctors, engineers, lawyers, and other professions. Yet that does not mean it would win a majority stake in elections—in part because that is not the group’s aim.

Contrary to their image as a group obsessed with power, the Brotherhood has historically been content to “run to place,” aiming simply for representation rather than control. Islamist groups often deliberately lose elections. Arab Islamist parties in Egypt, Jordan, Morocco, Kuwait, Bahrain, and Yemen have, on average, chosen to contest less than 40% of the available seats in recent elections.[7] In other words, even if Islamists won every seat they contested, they still would not gain a majority. Even the Hamas victory in the Palestinian parliamentary elections of 2006 came about more as a result of Fatah’s lack of coordination and general disarray than from an attempt by Hamas to take power.[8] This caution is reflected in the January 31 comments of senior Brotherhood leader Mohamed el-Beltagui: “the Brotherhood realizes the sensitivities, especially in the West, towards the Islamists, and we’re not keen to be at the forefront.”[9] Islamists even have a phrase for this—the “American veto”—the notion that the United States, and the world at large, is not yet ready for Islamists in government. The memory of Algeria—where the Western-backed military annulled parliamentary elections after Islamists won—looms large.

Thus, taking into account both capabilities and intentions, it is clear that the Islamists will not be in a position to control Egypt’s foreign policy. For a group like the Brotherhood, attempting to take the lead on controversial issues such as the peace treaty with Israel offers significant risks yet few benefits. The Brotherhood, as part of any post-Mubarak political order, will be subject to whatever pressures and constraints the United States and the international community places on it. For instance, any abrupt change in Egypt’s foreign policy would risk not only the $1.5 billion that the country receives from the United States, but also significant assistance from the European Union, as well as the broader commercial ties between Egypt and the West.

The Brotherhood, however, is and will remain a potent force in any Egyptian democracy that emerges. In other words, the Islamists are here to stay. Like any political organization, the Brotherhood will reflect the interests and desires of its constituency, which will increase in importance as the group competes with others in the political marketplace. Over time, this will drive the group to articulate a more distinctive foreign policy platform and attempt to influence the direction of Egypt’s relations with Israel, its neighbors, and the international community. Anticipating the coming changes, the United States should begin a serious and sustained strategic dialogue with all Egyptian opposition parties, including the Muslim Brotherhood, both in order to communicate U.S. interests and concerns, as well as to absorb theirs.

Counterterrorism Implications
There will be consequences for U.S. security interests following the fall of a key Arab ally. For instance, a democratically-elected government in Egypt would undoubtedly reduce cooperation with Israel and the United States on the blockade of Gaza. Yet given that the blockade is deeply unpopular across all sectors of Egyptian, and indeed, Arab societies, this should not be surprising. As Egypt’s post-Mubarak political order congeals, it is easy to imagine Egypt following a trajectory similar to Turkey: maintaining close economic and commercial ties to the West, while increasingly charting a more independent course in foreign affairs. Also as in Turkey, the military will likely play a significant behind-the-scenes role as a conduit of Western influence.

In some ways, the events in Egypt pose greater long-term challenges to jihadist groups than they do to the United States. First, there appears to be a causal link between lack of democracy and terrorist activity.[10] When citizens lack a peaceful outlet to express their views, the likelihood that they will turn to violence increases.[11] In the Middle East, regimes have historically deflected this anger by focusing it outward, on the United States and Israel. The jihadists have mirrored the process by changing the targets of their attacks from local regimes—the “near enemy”—to the “far enemy” of the United States.[12]

Second, al-Qa`ida has painstakingly crafted a narrative that peaceful, democratic change in the Middle East is both illegitimate and impossible, and that the Brotherhood’s embrace of those strategies reveals its bankruptcy. For instance, Ayman al-Zawahiri’s anger toward the group is laid out in his 1991 book The Bitter Harvest: The Muslim Brotherhood After 60 Years, in which he wrote,

“The Brotherhood participates in elections in Egypt, Jordan, Sudan, Kuwait, Algeria, Syria, and other Muslim lands governed by infidel governments. What is truly regrettable is the Ikhwan’s rallying of thousands of duped Muslim youth in voter queues before ballot boxes instead of lining them up to fight in the cause of Allah.”[13]

The events in Egypt and Tunisia have perhaps definitively undermined this narrative, while reinforcing the Brotherhood’s longstanding position that peaceful political engagement is the only legitimate way to change the political system, and that non-violence should be adhered to even in the face of repression by local governments.[14]

Egypt is in many ways fortunate because the Brotherhood’s deep-rooted presence in Egyptian society has meant that jihadist groups have been unable to gain much traction inside the country.[15] Apart from a small number of scattered, uncoordinated incidents, Egypt has been largely free of jihadist violence since the bloody insurgency of the mid-1990s. While partially due to the Egyptian security service’s brutally effective counterterrorism campaign, the Brotherhood has also succeeded in making their incrementalist approach to social change “the only game in town.” Former jihadist groups, such as al-Gama`a al-Islamiyya (The Islamic Group), have engaged in extensive ideological revisions, renouncing violence and accepting the legitimacy of the existing system, moving closer to a Brotherhood-style interpretation of Islam.[16] As long as the Brotherhood remains strong, Egypt will continue to present an unfriendly environment for the growth of Salafi-jihadism.[17]

Brotherhood Faces Challenges Ahead
Like any large organization, the Brotherhood contains multiple ideological trends: those desiring a more explicit political orientation, those wishing to focus on social and cultural reform, and those inhabiting a broad middle.[18] In the past, the organization has been able to manage these tensions through caution and calculation. In the end, the group has earned a reputation for hedging that has occasionally bordered on paralysis. Rather than cunning, the Brotherhood’s involvement in the recent protests in many ways reflects these tensions—younger, more politically-oriented Brothers sought the group’s involvement from the outset, while those focused on sociocultural issues were content with restraint.

The next few months, however, will see the Brotherhood pushed out of its comfort zone and forced to play a more explicit political role. Given the presence of ideological trends inside the group hesitant to take on this role, it is likely that the requirements of an increased political profile will exacerbate internal divisions. To be sure, the group has, in recent years, developed internal consultative mechanisms that increase its ability to resolve debates while maintaining organizational cohesion. Yet with the advent of Egyptian democracy, this may not be enough. Repression, for all the problems it caused the Brotherhood, served to unify its ranks. When survival is at stake, a group can postpone answering difficult questions. Now, for the first time in decades, the Brotherhood will have little choice but to face them.

Steven Brooke is a Ph.D. student in the Department of Government at the University of Texas at Austin.

[1] The Muslim Brotherhood is the world’s oldest and most influential Islamist group. Founded in Egypt by Hasan al-Banna in 1928, the group has since established branches throughout Middle Eastern and European countries. The Brotherhood differs from jihadist groups in that the Brotherhood rejects violence as a means to alter society, instead advocating political participation and peaceful, long-term change.

[2] Other factors likely playing into the Brotherhood’s decision were its recognition that the regime would seize the opportunity to portray any demonstration as an Islamist project, as well as perhaps a wariness to publicly mobilize given the Christian-Muslim tension in the wake of the Alexandria church bombing on January 1, 2011.

[8] In particular, multiple candidates from Fatah would run for one seat, splitting the vote, while Hamas ensured only one candidate per district.

[13] The full book is available in Arabic online at www.tawhed.ws/r?i=2gxseb4t.

[15] On this point, see Marc Lynch, “Jihadis and the Ikhwan,” in Moghadam and Fishman.

[17] It is instructive to contrast Egypt to Iraq in this respect. Saddam Hussein had brutally repressed the Muslim Brotherhood for years, forcing the group almost completely into exile, leaving a vacuum that Salafi-jihadis were able to exploit in the post-Saddam environment. Similarly, whatever the other problems of Hamas control in Gaza, the organization has succeeded in preventing Salafi-jihadi infiltration.