The Methods and Impact of Developing a Resilient Public 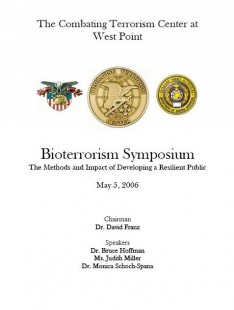 Biological weapons pose unique challenges for U.S. defense and homeland security planners. In conceptualizing a response, U.S. policymakers thought first of technical solutions and training of emergency responders to protect the population or respond to a bioterror event. Next, they considered non-proliferation and traditional deterrence approaches to reducing the likelihood of an attack. More recently, some have begun thinking about strengthening the resolve of the general public in order to mitigate the effects of an attack and, perhaps, serve as a deterrent. The primary goals of this workshop were to:

Twenty Years After 9/11: Reflections from Michael Morell, Former Acting Director of the CIA