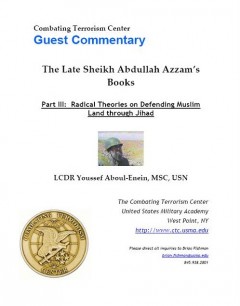 Sheikh Abdullah Azzam, more than any other cleric, is considered the strategic founder of al-Qaida. His very utterances of the need to establish an al-Qaida al-Sulba (firm foundation) to export jihad where Muslims are persecuted is the name Bin Laden finally settled on when naming his organization al-Qaida. To understand Bin Laden and those who harbor sympathies to al-Qaida, as well as their strategic vision, it is vital to re-discover Azzam’s books. Part I of the series will look into his book entitled Ayyat al-Rahman fee Jihad al-Afghan (God’s Signs in the Afghan Jihad). Azzam’s aim was to mythologize and market the conflict by giving interpretations from the Korn regarding the Soviet-Afghan War and its significance. Part II will look at Azzam’s history and his theories of what needed to be done to defend Muslim lands under assault. Part III will explore a book on Azzam’s views on the remedy for Muslim victimization.

Reading Azzam represents the cutting edge towards understanding a sworn enemy of the United States, and it is incumbent that American military planners immerse themselves in the ideology, mythology, language and strategy of Islamist militant groups. Azzam is as significant strategically to al-Qaida and its affiliates as Carl von Clausewitz is to the study of conventional warfare. Azzam founded Maktab al-Khidmat (Services Office for Arab Jihadists), an organization dedicated to organizing Arab jihadists fighting the Soviets in Afghanistan, and was a mentor to Usama Bin Laden. Azzam was killed in a massive bombing of his car in the streets of Peshawar, Pakistan in November 1989. The assassination of Azzam remains a subject of speculation and is unsolved.