The Impact of Bin Ladin’s Death on AQAP in Yemen 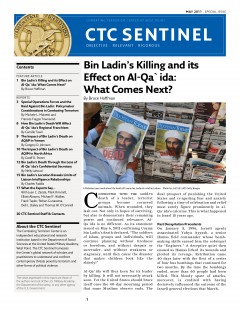 Yemen’s branch of al-Qa`ida, more than most affiliates, is modeled closely on the main network Usama bin Ladin built in Afghanistan in the late 1990s. The head of the Yemeni organization, Nasir al-Wihayshi, served as Bin Ladin’s personal secretary and aide de-camp for nearly four years until the two were separated during the Battle of Tora Bora in late 2001. Years later, after he escaped from a maximum security prison in Yemen, al-Wihayshi put the lessons of his apprenticeship into practice. He painstakingly pieced back together an organization that had been all but destroyed by a critical drone strike and years of arrests, ultimately resurrecting al-Qa`ida’s Yemen chapter.

In January 2009, he merged his Yemeni cadre with a group of Saudi exiles, who had fled south, calling the new group al-Qa`ida in the Arabian Peninsula (AQAP). Like his mentor Bin Ladin, al-Wihayshi required that members of the organization swear loyalty to him by taking an oath known as a bay`a. Since then, AQAP has transformed itself into a serious international threat, nearly assassinating Saudi Arabia’s top counterterrorism official and attempting two attacks on U.S. domestic targets. Earlier this year, Michael Leiter, the director of the National Counterterrorism Center, told a Senate hearing that AQAP was “probably the most significant threat to the US homeland.”

Bin Ladin’s death is unlikely to seriously alter AQAP’s day-to-day operations. AQAP is already active fundraising in Saudi Arabia and the Gulf, and it will likely seek to increase its efforts to capitalize on any outpouring of emotion in the weeks after Bin Ladin’s death. More international recruits may find their way to Yemen in the aftermath of the Abbottabad raid, but the core, local recruits will continue to be driven to swear allegiance to al-Wihayshi by domestic grievances.

Al-Wihayshi Firmly in Charge of AQAP
Nasir al-Wihayshi, with input from a senior council of advisers, is the individual who approves suicide strikes in Yemen and authorizes attacks abroad. Fighters in Yemen take their orders from him. Even before al-Qa`ida branched out into a series of worldwide affiliates, Bin Ladin favored what he called “centralization of decisions and decentralization of execution,” leaving the details of any given attack up to his men on the ground. Over the years, as Bin Ladin went into hiding after 9/11 and had to communicate with lieutenants through a series of couriers, his philosophy continued to evolve. Bin Ladin’s local amirs, the commanders in charge of affiliates, had the operational freedom to largely chart their own course. They knew the enemy, and they had years of precedents and previous al-Qa`ida attacks upon which to draw. Bin Ladin left the details to them, while providing a broad set of instructions. Only in extreme cases, such as Abu Mus`ab al-Zarqawi’s orgy of violence in Iraq, did the al-Qa`ida commander attempt to rein-in his men.

For nearly two decades, Bin Ladin lived with the certainty that intelligence agencies around the world wanted him dead. Their assassination plans and spies were a constant part of his life. Every decision he made in building al-Qa`ida was taken with the knowledge that he might be killed at anytime. The organization had to be able to survive his death. In his years at Bin Ladin’s side, al-Wihayshi took this truth to heart.

Underscoring the lesson was al-Qa`ida’s initial failure in Yemen after 9/11. In November 2002, a U.S. drone strike killed Abu Ali al-Harithi, the top al-Qa`ida commander in the country. Al-Harithi’s death decapitated the organization. Without its leader, al-Qa`ida in Yemen withered. Al-Wihayshi wanted to avoid this outcome the second time around. He adapted Bin Ladin’s blueprint to fit the local context, appointing local amirs in different governorates across the country. Al-Harithi never accomplished that level of organization and delegation. Just like Bin Ladin, al-Wihayshi constructed a durable infrastructure that was designed to survive the loss of key leaders.

By the time the United States targeted AQAP with airstrikes in late 2009 and early 2010, al-Wihayshi’s strategy and contingency plans were well entrenched. The United States managed to kill several key commanders, but unlike in 2002 al-Qa`ida did not fold in Yemen. Instead, due to brand control and careful positioning, which portrayed it as the defender of Muslim lands against U.S. aggression, AQAP is actually stronger today in terms of recruits than it was in late 2009, when it dispatched a suicide bomber who was able to board a U.S.-bound plane.[1]

Part of this is attributable to a botched U.S. bombing raid in December 2009 that killed a number of women and children in the southern Yemeni village of al-Majalla.[2] The U.S. strike, AQAP argued in its public statements, demonstrated that Yemen was no different from Iraq or Afghanistan; just like those two countries, its ideologues wrote, Yemen is under Western military attack. The al-Majalla “massacre,” as AQAP referred to it, not only permitted fighting in Yemen, but actually compelled it. The attack confirmed Yemen as an active theater of jihad. More recent U.S. strikes, such as the one on May 5 that killed two AQAP suspects, fits into a similar narrative.

AQAP Remains Entrenched in Yemen
Bin Ladin’s death will have little effect on AQAP’s strategic goals. Indeed, the seeds of AQAP were sown years ago in the late 1990s, when leaders such as al-Wihayshi graduated from religious institutes in Yemen and headed to Afghanistan. During the past decade, many more have followed their path, coming of age in an even more radical environment than the one that produced AQAP’s current crop of leaders. The only world many younger members of AQAP have ever known is one in which the United States is at war in two different Muslim countries. The largely peaceful protests that are threatening long-serving rulers across the Arab world could be an antidote, but that is far from guaranteed. New governments will have to deal with artificially inflated expectations and will have to make difficult decisions in countries that have been mismanaged for years.

In Yemen, President Ali Abdullah Salih has refused to step down, stubbornly clinging to power through weeks of protests that have split his security forces. The crisis at the center has opened up a great deal of space for AQAP, which has reportedly acquired cash and armaments from deserted military posts. In the absence of outside pressure, AQAP is likely taking this opportunity to regroup and continue plans for future attacks. The longer the stalemate continues, the better positioned AQAP will be for the future. Whether Salih stays or goes, AQAP is a long way from being crushed. This time it will take more than the deaths of a few key leaders to make sure it stays defeated.

The Role of Yemeni-American Cleric Anwar al-`Awlaqi
Especially concerning is how AQAP has begun to target the United States directly. AQAP’s success in smuggling a bomb through airport security nearly a decade after 9/11 and the ensuing media frenzy helped push Yemen toward the top of the world’s jihadist hotspots. Along with renewed U.S. attention came the rise of Anwar al-`Awlaqi, an American citizen of Yemeni descent, who speaks fluent, idiomatic English. Even before Bin Ladin’s death, U.S. House Representative Jane Harman of California called al-`Awlaqi the “number 1 terrorist threat against us.” Numerous Western terrorism experts and media pundits have followed Harman’s lead, suggesting that the former imam of a Virginia mosque is well positioned to replace Bin Ladin as the new head of al-Qa`ida. In al-`Awlaqi they have found a recognizable adversary, someone who speaks their language and whose name they already know. Yet al-`Awlaqi’s media profile in the West has overshadowed his role within AQAP. He is often mistakenly said to be the head of AQAP or its spiritual leader. Neither is true. It is not even clear if al-`Awlaqi has a place on AQAP’s Shari`a council, which is headed by Adil al-Abab.

There is no doubt that al-`Awlaqi is a significant threat, but not as a successor to Bin Ladin. Personal relationships matter in al-Qa`ida, and al-`Awlaqi did not have one with Bin Ladin. He never studied under him, and there is no record of the two ever meeting. Instead, it is al-Wihayshi, the student of the shaykh, as Bin Ladin was affectionately known, who will continue to lead AQAP, while al-`Awlaqi grows into his role as al-Qa`ida’s voice to the Muslim diaspora in the West. This is a new direction for the terrorist organization that it believes will yield great results. Previously, al-Qa`ida’s leaders had to rely on Western Muslims to come to them. Now, al-`Awlaqi and others such as Samir Khan, who edits AQAP’s English-language magazine Inspire, are building a major recruiting effort focused on Muslims in the West.

Conclusion
Despite Usama bin Ladin’s death in Pakistan, AQAP will continue on the course it has set for itself, aiming to attack local, regional, and Western targets. Shortly after Bin Ladin’s killing, the organization released a statement threatening revenge. Similar wording will also be used as a rationale for future attacks, but this is post facto rhetorical gloss. AQAP would target the United States regardless of whether Bin Ladin survived the raid in Abbottabad.

[1] This argument is based on the number of new authors that appeared in AQAP’s Arabic journal Sada al-Malahim (Echo of Battles), as well as the sharp increase in local attacks by AQAP in 2010 and 2011.  Both of these suggest that AQAP gained recruits in the aftermath of the al-Majalla attack, which featured prominently in its Arabic-language propaganda throughout 2010. AQAP particularly played up the fact that a number of women and children were killed in the U.S. airstrike, arguing that Yemenis had to defend their country against Western military attacks.