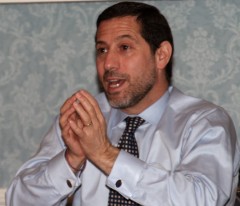 –Special thanks to Mr. George Gilmore for generously supporting this position–

Professor Bruce Hoffman has been studying terrorism and insurgency for nearly four decades. He is a tenured professor in Georgetown University’s Edmund A. Walsh School of Foreign Service where he is also the Director of both the Center for Security Studies and of the Security Studies Program. In addition, he is Professor of Terrorism Studies (part-time) at St Andrews University, Scotland. Professor Hoffman previously held the Corporate Chair in Counterterrorism and Counterinsurgency at the RAND Corporation and was also Director of RAND’s Washington, D.C. Office. He was appointed by the U.S. Congress to serve as a commissioner on the Independent Commission to Review the FBI’s Post-9/11 Response to Terrorism and Radicalization and co-wrote its report. Professor Hoffman was Scholar-in-Residence for Counterterrorism at the Central Intelligence Agency between 2004 and 2006; an adviser on counterterrorism to the Office of National Security Affairs, Coalition Provisional Authority, Baghdad, Iraq in 2004, and from 2004-2005 an adviser on counterinsurgency to the Strategy, Plans, and Analysis Office at Multi-National Forces-Iraq Headquarters, Baghdad. He was also an adviser to the Iraq Study Group. He is the author of Inside Terrorism (2006). Professor Hoffman most recent books are The Evolution of the Global Terrorist Threat: Cases From 9/11 to Osama bin Laden’s Death ( 2014), and Anonymous Soldiers: The Struggle for Israel, 1917-1947 (2015).

Terrorism and Counterterrorism Challenges for the Biden Administration

The Global Terror Threat and Counterterrorism Challenges Facing the Next Administration

The Evolution of the Global Terrorist Threat: From 9/11 to Osama bin Laden’s Death

The Arab Spring and its Influence on Al-Qa`ida