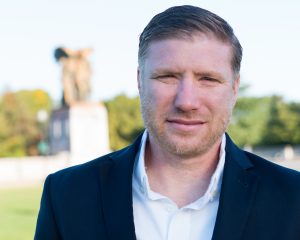 Alex Gallo is a Principal with BMNT, a Silicon Valley start-up that conducts innovation work in national security and defense. He is also an advisor with Hacking for Defense, Inc. (H4Di), a university-sponsored education program that helps students develop a deep understanding of the problems and needs of government sponsors in the Department of Defense and the Intelligence Community.

Alex is also a Senior Associate with the Center for Strategic and International Studies (CSIS), and he recently completed a fellowship as the National Security Practitioner in Residence with START at the University of Maryland.

Prior to his CTC fellowship, Alex Gallo served as a Professional Staff Member with the House Armed Services Committee (HASC), full committee policy staff, from 2012-2017. In this capacity, Mr. Gallo was responsible for authoring National Defense Authorization Act (NDAA) legislation and conducting oversight of U.S. defense policy in the Middle East, Africa, and the Indo-Asia-Pacific regions. Additionally, he advised the Chairman of the HASC on these policy issues.

Prior to joining the committee, Mr. Gallo served as the deputy director of the CTC and as an instructor in the Department of Social Sciences at West Point. In this capacity, he taught classes in American politics, terrorism and counterterrorism, and homeland security. His research at the CTC included the evolution of al-Qa`ida and U.S. strategy in Afghanistan.

Alex holds a Bachelor of Science in American Politics from the United States Military Academy at West Point and a master’s degree in public policy from the Harvard Kennedy School. He has completed a Term Membership with the Council on Foreign Relations and is a lifetime member of the Veterans of Foreign Wars and the Society of the First Infantry Division.

American national security policy needs to get ready for ISIS 2.0

Do we have the tools we need to combat ISIS?

A plan for peace in Afghanistan

A state-based strategy for the Middle East