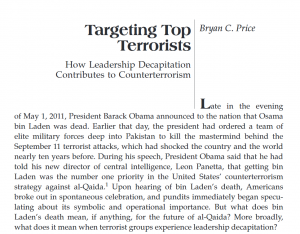 In the spring of 2012, the CTC’s Director LTC Bryan Price had an article of his published in International Security. The article, based on his doctoral research, empirically examines how leadership decapitation contributes to counterterrorism.

Click here to read the article, or peruse the abstract below.