Success, Lethality, and Cell Structure Across the Dimensions of Al Qaeda 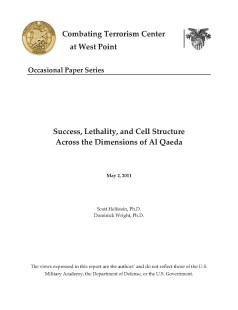 The death of Osama bin Laden on May 1, 2011 represents the culmination of a decade long fight to bring the perpetrators of the September 11 attacks to justice. Sustaining the effort needed to arrive at this point is a testament to the resilience of the counterterrorism community and nation, but it subsequently raises a series of questions regarding the future of al‐Qa’ida and the violent social movement spawned by bin Laden and fellow entrepreneurial jihadis.

It is tempting to view his death as the end of a long struggle, but the violent extremists radicalized and mobilized by al‐Qa’ida’s global jihadi narrative regard this as the end of the opening act. The terrorist threat that the United States and its allies face today has evolved in the years since September 11. Over that time, experts have engaged in heated debates over al‐Qa’ida’s strategic center of gravity, with some stressing the importance of central leadership while others emphasize the threat from radicalized individuals unconnected with any formal organization. This seemingly academic debate about the nature of al‐Qa’ida is crucial to understanding the possible manifestations of the threat following bin Laden’s death, as well as guiding the way forward for policymakers, practitioners, and the general public.