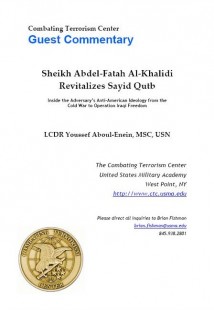 This article will highlight a recent book published by radicalist cleric Sheikh (Dr.) Salah Abdel-Fatah Al-Khalidi entitled “Al-Harb Al-Amriki bee Manather Sayid Qutb (The American War from the Perspective of Sayid Qutb).” This 101-page booklet is unique because it both revives Qutb’s writings four decades after his death and concentrates all of Qutb’s hatred and vitriolic ideology specifically directed against the United States. Al-Harb Al-Amriki bee Manather Sayid Qutb revives a 1985 book by Khalidi, reintroducing Qutb in 2003 on the Arab street, in order to justify a total war against the United States on the eve of Operation Iraqi Freedom. The text was published in Amman, Jordan published by Dar-al-Uloom for Printing and Distribution. This review essay exposes Khalidi as a major keeper of Qutb’s legacy, having published over 40 books on Islamist radical theory, at least eight of which delve into Qutb and his theories.

Sayid Qutb (1906-1966) is a chief ideologue in modern Islamist militancy whose writings have influenced the thinking of Usama Bin Laden and Ayman Al-Zawhairi. Qutb spent two decades perfecting his theory of takfir (condemnation as apostates Muslims and non-Muslims who disagree with his world view), and re-defining the old Islamic term of jahiliyah (which literally means being in a state of ignorance and which was often used to describe Meccan persecution of Muslims in 7th century Arabia), in order to apply it to all of Egyptian society who disagree with his worldview. Qutb argued that Muslims should remove themselves physically from a jahili (un-Islamic and ignorant) society to establish an enclave from which to export revolution and Salafi (a return to the pious founders of Islam) ideology to bring about an Islamic state on the Salafi model.