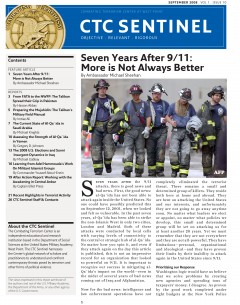 Seven years after the 9/11 attacks, there is good news and bad news. First, the good news: al-Qa`ida has not been able to attack again inside the United States. No one could have possibly predicted this on September 12, 2001, when we looked and felt so vulnerable. In the past seven years, al-Qa`ida has been able to strike the non-Islamic West in only two cities, London and Madrid. Both of these attacks were conducted by local cells with varying levels of connectivity to the central or strategic hub of al-Qa`ida. No matter how you spin it, and even if they attack again on the day this article is published, this is not an impressive record for an organization that looked so powerful on 9/11. It is important to recognize our success in mitigating al-Qa`ida’s impact on the world—even in the midst of several years of bad news coming out of Iraq and Afghanistan.

Now for the bad news: intelligence and law enforcement operations have not completely eliminated the terrorist threat. There remains a small and determined group of killers. They reside both here at home and abroad. They are bent on attacking the United States and our interests, and unfortunately they are not going to go away anytime soon. No matter what leaders we elect or appoint, no matter what policies we develop, this small and determined group will be set on attacking us for at least another 20 years. Yet we must remember that they are not everywhere and they are not all-powerful. They have limitations—personal, organizational and ideological—and they have proven their limits by their inability to attack again in the United States since 9/11.

Washington logic would have us believe that we solve problems by creating new agencies and spending tons of taxpayers’ money. I disagree. As proven by the good work completed under tight budgets at the New York Police Department (NYPD), leadership, focus, creativity, and prudent risk-taking are more effective tools in the fight against terrorism than a steady flow of federal taxpayer dollars into already massive bureaucracies.

The most important work in protecting our country since 9/11 has been accomplished with the capacity that was in place when the event happened, not with any of the new capability brought since 9/11. I firmly believe that huge budget increases have not significantly contributed to our post-9/11 security. Of course, over time, these gargantuan budgets will enhance our capability, but the cost-benefit ratio does not compute favorably. The big wins had little to do with new programs. The Central Intelligence Agency’s crowning achievement was the takedown of the Taliban in Afghanistan, conducted only months after 9/11 with the same people and organization that existed before. What made the difference was that the CIA was finally unleashed in Afghanistan and around the world. The same holds true for the Federal Bureau of Investigation: most of the productive work after 9/11 was accomplished within the existing infrastructure, but newly focused on al-Qa`ida and guided by the Patriot Act. Based on my experiences in New York City, I would say that all of the post-9/11 increases in the FBI’s counter-terrorism business could have been supplied from existing resources within the New York office. New missions could easily have been taken from current units by shifting priorities rather than spending more money.

Thinking Smart about our Strategy

As we assess the future of counter-terrorism policy and programs, it is important to ask ourselves what has worked thus far. Beyond the obvious and important impact of the Afghan takedown, the basic intelligence work by law enforcement and intelligence operatives has make the biggest difference. American police and intelligence agents have been alert to the threat since 9/11, and it is they who have crushed the cells attempting to strike us again. U.S. intelligence has been successful in identifying potential attackers before they can mount an attack in the West, and U.S. military forces have neutralized their capabilities around the globe. Significantly, I am not aware of any attacks that were intercepted by defensive measures such as detectors, screenings or patrols. Defeating terrorism has been all about finding and crushing the cells—at home and abroad. When it comes to al-Qa`ida, our best defense is a good offense.

The costs of an ideal offensive strategy are relatively small in terms of budgetary allocations. The real issue lies in aversion to the idea of spying at home and in dealing with unsavory intelligence organizations abroad. The challenge is to create innovative and risk-taking programs that operate within the law, have strong oversight, and allow for an occasional failure of execution. If we overly constrain the CIA, FBI, National Security Agency, and other players such as the NYPD, we will find ourselves conducting another 9/11 Commission in a few years, wondering how another catastrophe could have occurred on our shores.

The effectiveness of defensive strategies such as opening up all of our containerized shipping, strangling our petrochemical industries with regulatory requirements, and entrenching ourselves and our government institutions behind barriers must be carefully scrutinized. These defenses are often modern versions of the Maginot Line built by the French after World War I, which was so easily bypassed by the Nazi military machine. Walls around our critical infrastructure will also be easily bypassed if terrorist cells are able to organize a plot and construct a weapon. Getting to a good target is relatively easy; we must stop the terrorists before they get to that point. Some targets need to be protected, but we must recognize that not everything can or should be protected; the cost is too prohibitive.

Suggestions for the Next President

The next president should start off his counter-terrorism effort by asking each agency (primarily the CIA and FBI) to delineate its top layer of activity, representing at least 10 percent of the budget, that contributes to defending our nation from terrorist threats. Then, like most businesses that have to balance a budget, these agencies should put more resources into the high-value, high-payoff activity, eliminating the low-value, low-payoff activity. Of course, each agency will scream that everything they do is critical and to cut anything would seriously jeopardize our national security, thereby placing the blame for future failure on anyone who dares to challenge a budget increase. That kind of nonsense should not be tolerated. More is not necessarily better.

I remember what Mike O’Neil, who runs the counter-terrorism unit at NYPD, told me: “Commissioner, I’d rather have a handful of quality people and get rid of the deadwood. The deadwood just distracts me and the people trying to get the job done.” During our time together, we worked hard to build the right sized unit, not the biggest unit. Dave Cohen also shrank the Intelligence Division at NYPD in total numbers while creating a new and more creative organization. He accomplished this by eliminating low-value work and focusing the good people he had on the task at hand. Meanwhile, even as the NYPD got smaller overall and new counter-terrorism functions were added, crime rates continued to drop. It bears repeating: more is not always better.

Ambassador Michael A. Sheehan has had a 30-year career of public service. He has served with distinction as a U.S. Army Special Forces officer, a White House aide for two administrations, as a senior diplomat at the State Department and the United Nations, and finally as the head of counter-terrorism for the NYPD. As the Deputy Commissioner for Counter-Terrorism at NYPD, he helped reshape the NYPD into what is widely regarded as one of the most effective counter-terrorism organizations in the world. His latest book reflects on much of his career in counter-terrorism and is entitled, Crush the Cell: How to Defeat Terrorism without Terrorizing Ourselves. Ambassador Sheehan is a Senior Fellow at the Combating Terrorism Cente