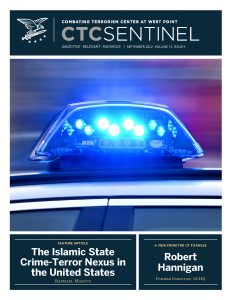 In this month’s feature article, Raphael Marcus, a supervisory intelligence research specialist at the NYPD Intelligence Bureau, examines the nature of the crime-terror nexus in the United States based on a dataset of 237 U.S. Islamic State defendants and perpetrators. He writes that although seemingly less prounounced than for racially and ethnically motivated violent extremists, “the crime-terror nexus in the United States is observable in about one-third of Islamic State cases and had an impact on defendants’ pathway to terrorism.” He notes that “the prevalence of prior violent crime in 20 percent of U.S. Islamic State defendants may provide indicators to law enforcement related to the propensity for violence of a subject exhibiting signs of extremism” and that “in the United States, there appears to be little organizational overlap between gangs and Islamic State extremists despite some similarities related to recruitment patterns and underlying mechanisms that draw individuals to such groups.” He adds that “in prison, relationships formed by U.S. Islamic State inmates only occasionally had plot relevance, but exposure to charismatic or high-profile terrorist inmates was a key factor in the cases of prison radicalization.”

Our interview is with Robert Hannigan who served as Director of GCHQ, the United Kingdom’s largest intelligence and security agency and NSA equivalent, between 2014 and 2017. Prior to that, Hannigan’s service also included working as the Prime Minister’s Security Adviser from 2007-2010, giving advice on counterterrorism and intelligence matters.

Michael Duffin, a senior advisor on countering violent extremism at the U.S. Department of State’s Bureau of Counterterrorism, examines the evolution of the violent far-right in Poland. He writes: “Along with Hungary and Serbia, Poland has become a point of interest for white supremacists globally for being a predominantly homogeneous country of white Christians led by a socially conservative government. One of the biggest draws for international violent far-right groups is the Independence Day march organized by Polish far-right groups in Warsaw every November 11. Since the early 1990s, Poland has also been a popular destination for a range of violent far-right activities, including neo-Nazi concerts, ‘whites only’ mixed martial arts (MMA) tournaments, and paramilitary training. The hate these groups direct toward racial and ethnic minorities, immigrants, members of the LGBTQI+ community, and other perceived enemies such as anti-fascists and liberal politicians is part of a growing trend of polarization across Poland.”