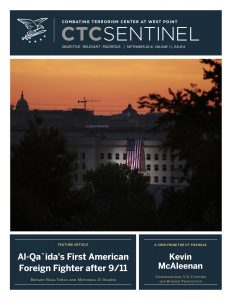 From the Editor
Seventeen years after 9/11, the threat posed by jihadi terrorist groups is in a state of flux. The demise of the Islamic State’s territorial ‘caliphate’ has demoralized some of its supporters and eroded some of the group’s ability to direct attacks in the West. But the Islamic State still has a large sympathizer base, a significant presence in Syria and Iraq, and dangerous nodes in other parts of the world. Meanwhile, al-Qa`ida and its network of affiliates and allies have grown in strength in some regions and could pivot back to international terror. Worryingly, both groups in the years to come may be able to draw on an ‘officer class’ of surviving foreign fighters who forged personal bonds in Syria and Iraq.

In our cover article, Bryant Neal Viñas, the first American to be recruited into al-Qa`ida after 9/11, writes about his experiences for the first time in the hope that his case study sheds light on the foreign fighter issue. Viñas was convicted for his actions and recently completed his prison sentence. His article is co-authored by Mitchell Silber, who supervised analysis and investigation of his case at the NYPD Intelligence Division. During his time in the Afghan-Pakistan border region between 2007 and 2008, Viñas came into contact with a variety of jihadi groups, was trained by al-Qa`ida, and spent time with several of the group’s most senior figures. After his arrest, Viñas immediately started cooperating with U.S. authorities and contributed significantly to the near destruction of al-Qa`ida in the tribal areas of Pakistan.

Our interview this month is with Kevin McAleenan, the commissioner of U.S. Customs and Border Protection. Drawing on extensive field reporting, Michael Knights documents how Houthi forces in Yemen metamorphosed in just five years from guerrilla war fighters into a powerful military entity capable of deploying medium-range ballistic missiles. His article provides a case study of how an ambitious militant group can capture and use a state’s arsenals and benefit from Iran’s support. Audrey Alexander and Rebecca Turkington find mounting evidence that women engaged in terrorism-related activity receive more lenient treatment by the criminal justice system than their male counterparts. Derek Flood reports on how the Islamic State’s cave and tunnel complexes in the Hamrin Mountains are helping it sustain insurgent attacks in northern Iraq.

A View from the CT Foxhole: An Interview with Kevin McAleenan, Commissioner of U.S. Customs and Border Protection

The Houthi War Machine: From Guerrilla War to State Capture

Treatment of Terrorists: How Does Gender Affect Justice?

From Caliphate to Caves: The Islamic State’s Asymmetric War in Northern Iraq