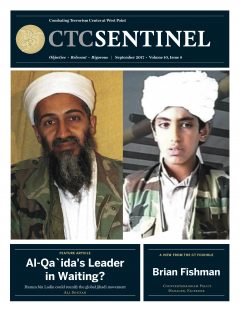 Sixteen years after 9/11, al-Qa`ida has a new figurehead (if not a new face) in the form of Hamza bin Ladin. On September 14, the group released an audio statement from Usama bin Ladin’s son calling for jihadis to double down on jihad in Syria and against what he depicted as an American-Russian-Shi`a conspiracy against Islam. It is not clear where Hamza, who is now in his late 20s, is currently based. So protective has al-Qa`ida been that the group has not circulated images of him since he was a child. In our cover article, Ali Soufan tells Hamza’s life story based on a wide range of sources, including recently declassified documents from Abbottabad. He argues that Hamza bin Ladin has not only emerged as al-Qa`ida’s leader in waiting, but is also the figure best placed to reunify the global jihadi movement as the Islamic State’s fortunes wane. Soufan points out Hamza’s hardening rhetoric toward Shi`a may represent an effort to attract deflated Islamic State fighters back into the al-Qa`ida fold.

In our interview, Brian Fishman, Facebook’s Counterterrorism Policy Manager, provides a detailed description of how Facebook is using artificial intelligence and a dedicated team of counterterrorism specialists to remove terrorism content from its platform. Given the emergence of a new generation of leadership within al-Qa`ida, it is critical to understand the evolving threat from the group in the Afghanistan-Pakistan region. Don Rassler outlines how arrest metrics in the mega-city of Karachi point to an uptick in activity by the resilient group. Colleen McCue, Colonel Joseph Massengill, Commander Dorothy Milbrandt, Lieutenant Colonel John Gaughan, and Major Meghan Cumpston outline how the Islamic State is “weaponizing children.” Nicholas Blanford reports from Lebanon on offensives this past summer by the Lebanese Armed Forces and Hezbollah against Sunni militants in the country. Aymenn al-Tamimi draws on newly obtained documents to examine the Islamic State’s posture toward Kurds.

Al-Qa`ida in Pakistan: A Metric Problem?

The Islamic State Long Game: A Tripartite Analysis of Youth Radicalization and Indoctrination

The Islamic State and the Kurds: The Documentary Evidence