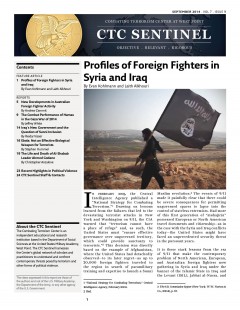 In February 2003, the Central Intelligence Agency published a “National Strategy for Combating Terrorism.” Drawing on lessons learned from the failures that led to the devastating terrorist attacks in New York and Washington on 9/11, the CIA warned that “terrorism cannot have a place of refuge” and, as such, the United States must “ensure effective governance over ungoverned territory, which could provide sanctuary to terrorists.” The events of 9/11 made it painfully clear that there could be severe consequences for permitting ungoverned spaces to lapse into the control of stateless extremists. It is these stark lessons that make the contemporary problem of North American, European, and Australian foreign fighters now gathering in Syria and Iraq under the banner of the Islamic State in Iraq and the Levant (ISIL), Jabhat al-Nusra, and potentially the Khorasan group so troubling. This article profiles a number of Americans and other Western foreign fighters who traveled to fight in Syria and Iraq, and assesses the potential threat these fighters pose to the West. It finds that these recruits often come from humble and unexpected origins. At times, they are evading the best efforts by law enforcement and intelligence agencies to detect and monitor them. The available evidence suggests they are also readily embracing the notion of combating their enemies far beyond the borders of the Levant.

Profiles of Foreign Fighters in Syria and Iraq

The Combat Performance of Hamas in the Gaza War of 2014

Iraq’s New Government and the Question of Sunni Inclusion

Ebola: Not an Effective Biological Weapon for Terrorists

The Life and Death of Al-Shabab Leader Ahmed Godane