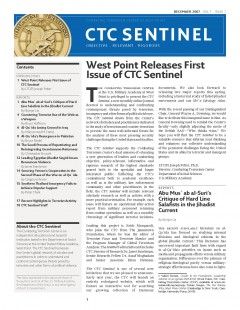 In early November, Yemen concluded an eight-month trial of 36 suspected al-Qa`ida militants. The trial, which was plagued by lengthy delays and allegations of torture, was the first legal action to address the country’s resurgent al-Qa`ida threat [1]. At the center of the trial was the role of the accused in two operations that marked the emergence of the second generation of al-Qa`ida in Yemen militants in 2006. The first was the February 2006 prison break of 23 al-Qa`ida militants from a Political Security Prison in Sana`a, which provided a core group of experienced leaders around whom Yemen’s young and largely directionless jihadists could rally. The second operation, which demonstrated the new generation’s tactical goals, was the failure of coordinated suicide attacks on oil and gas facilities in Hadramawt and Mar’ib in September 2006.

The delay in prosecuting these suspects, many of whom have been in custody since early 2007, is indicative of Yemen’s approach to the second phase of the war on al-Qa`ida. In the first phase, which lasted from October 2000 to November 2003, Yemen achieved success in utilizing U.S. support to dismantle the leadership of al-Qa`ida in Yemen. `Ali Qa’id al-Harithi, the then head of al-Qa`ida in Yemen, was eliminated through a targeted assassination carried out by a CIA drone in November 2002. His replacement, Muhammad Hamdi al-Ahdal, was also removed from the scene in November 2003 when he was arrested at a wedding in Sana`a. Following a series of attacks in the al-Qadisiyah district of Sana`a in 2002, Yemen carried out a number of security sweeps and arrested a significant amount of al-Qa`ida operatives.

Since then, however, al-Qa`ida has become much less of a priority for the Yemeni government. Part of this is a result of the success Yemen enjoyed during the first phase; with al-Qa`ida in Yemen largely destroyed or its operatives in jail, there seemed little urgency in continuing to fight an enemy that could not strike back. Those Yemenis that were still free and eager to continue the fight were drawn more to the war in Iraq against U.S. and coalition forces than they were to a leaderless jihad at home. Yemen also began to divert its limited resources, which had been devoted to keeping al-Qa`ida in check, to other more pressing issues such as a revolt in the northern highlands, growing public unrest over inflation and unemployment as well as rising regional tensions along pre-unification lines. All of these issues have increasingly occupied the government’s attention since 2004 and will continue to do so for the foreseeable future [2]. Unfortunately, as Yemen has been forced to deal with a number of different threats to its government, it has also been faced with a decline in oil production. This has corresponded to a similar fall off in oil revenue, upon which Yemen is almost completely dependent. The government has long used oil revenue to co-opt enemies and potential enemies. Significant declines in oil revenue make the traditional approach to governing Yemen untenable.

Already the government has been forced to withdraw pensions from former southern officers who were pushed into retirement in the aftermath of the 1994 Civil War [3]. This move has sparked protests and demonstrations, some of which have turned violent across the south. Similarly, the government has also been making cuts in subsidies on oil, gas and diesel, which has affected the price of all commodities, while at the same time government salaries have failed to keep pace with inflation [4]. This has provoked demonstrations and protests attacking the government for poor management. As these protests become more widespread during the coming years and as the government continues to lose money due to falling oil production, there is a danger that these different movements will coalesce into a single strand of anti-regime hostility [5].

As a result, in the future Yemen will be less able to combat al-Qa`ida than in the past. As the government continues to grow weaker and has less money to distribute, it will find that its tradition of financial persuasion and playing different groups off against one another will no longer be feasible. The government will increasingly lack the resources—both military and financial—to compel different tribes to act in accordance with policy determined in Sana`a. Out of necessity, it will also seek to avoid direct confrontations with its enemies as it attempts to ensure its own survival. Instead, it will be forced to pursue its policy of persuasion through other channels. Yemen has already given the United States an example of how this will work with regard to al-Qa`ida in the case of Jamal al-Badawi.

The Case of Jamal al-Badawi

In mid-October, Yemen announced that Jamal al-Badawi, one of the masterminds of the USS Cole attack, had surrendered to Yemeni authorities after months of negotiation between the government and tribal intermediaries. Within weeks, media reports out of Yemen were stating that al-Badawi was free and receiving visitors at his home in Aden. The United States reacted immediately to the reports by postponing payment of more than $20 million in aid that was to be paid to Yemen through its Millennium Challenge Account [6]. Threatened with a reduction in aid on which it was depending, Yemen scrambled to prove to Washington that al-Badawi was still in prison. U.S. officials were taken on a prison tour to visit al-Badawi in his cell. More recently, the independent weekly al-Wasat reported that al-Badawi has once again been released from prison [7]. This report was immediately denied by the Ministry of the Interior [8].

Whether or not al-Badawi is currently free is largely irrelevant. If he is not free he eventually will be, unless the United States continues to threaten Yemen with drastic cuts in aid money. As part of the deal that led to his surrender, Yemen promised al-Badawi his freedom in exchange for his commitment not to engage in violent activities within the borders of the state. This deal is similar to other agreements that Yemen has reached with some of the other escapees, as well as with imprisoned jihadists [9]. Yemen will appease the United States when it is forced to, but it is more worried about its reputation as an honest negotiator and its future ability to deter jihadists; it is not concerned with past attacks, but rather is determined to head off future attacks, such as the one in Mar’ib this past summer, which could further destabilize its economy.

Yemen’s strategy seems clear. It will negotiate and release individuals who promise not to carry out operations within Yemen. Intentionally or not, this policy has had the effect of driving a wedge between al-Qa`ida’s old guard and its younger, more radicalized members. The old guard, which experienced the crackdown and dismantling of its leadership in the first phase of the war, has largely embraced the government’s offer, while the new generation has steadfastly refused to budge from its militarized stance [10]. During the past few months, the two sides have engaged in an increasingly acrimonious debate over the future of al-Qa`ida in Yemen. Fragments of this debate have emerged in public forums such as chat rooms and media outlets, but most of this discussion has remained private. What does seem clear, however, is that the two sides have broken with each other over the issue of carrying out attacks in Yemen. The new generation, as the July 2 attack on a tourist caravan in Mar’ib made clear, is determined to strike whenever and wherever it can, while the old guard continues to call for caution and patience.

The United States will only be successful in the second phase of the war against al-Qa`ida if it can convince Yemen that the interests of both countries converge when it comes to the terrorist group. This will not be accomplished easily. There are two critical points that the United States must recognize. First, what it wants Yemen to be capable of and what the Yemeni government is actually capable of are not the same. Second, despite its global standing, the United States is not the most influential country to Yemen. Saudi Arabia is much more important to Yemen’s economic future and long-term stability than is the United States. Riyadh injects more money into Yemen both officially and unofficially—through payoffs to tribal leaders—than does any other country. There is also a feeling within Yemen that the United States and its aid may disappear when its security interests are no longer threatened. This is not the case for Saudi Arabia. Just as the United States uses regional neighbors in other parts of the world as intermediaries, so too must it utilize Saudi Arabia to help stabilize Yemen as well as assist it in combating al-Qa`ida.

Washington should make clear to Yemen that it will not allow it to become a failed state. Not only will this ensure greater Yemeni cooperation against al-Qa`ida, but it is also in the best long-term interests of the United States. It should also pressure Saudi Arabia to funnel all money into Yemen through the government, which will not only further stabilize the economy but also allow the central government greater control over its hinterlands. Only by guaranteeing the regime’s survival will Sana`a be free to pursue the war against al-Qa`ida in Yemen in concert with the United States. Otherwise, it will be forced to rely on a haphazard policy of half-measures.

Gregory D. Johnsen is the author of the forthcoming monograph Reforming Yemen: Foreign Aid and the Push for Democracy (Foreign Policy Centre).  He has written for a variety of publications, including The American Interest, The Christian Science Monitor and The Boston Globe. Mr. Johnsen has also consulted for various organizations on security and political issues in Yemen and the Gulf.  He is currently a Ph.D. candidate in Near Eastern Studies at Princeton University.

[10] See, for example, the insightful article on the split between the two generations published by al-Ghad, July 4, 2007.