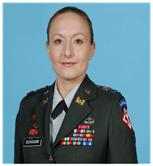 Major Vanessa R. Bowman commissioned through the Reserve Officer Training Corps in 2001 as an Engineer officer from the University of Arizona, Tucson.