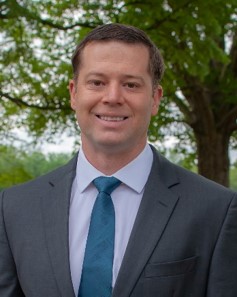 MAJ Stephen Vadovsky, Jr. is a native of West Palm Beach, Florida. He enlisted in the Army in 1999 as an Electronic Warfare Signals Intelligence Analyst. In 2004, he deployed to Iraq with the Counter-IED Targeting Program (CITP) Weapons Intelligence Detachment in support of Operation Iraqi Freedom. In 2006, he received a Green-to-Gold Scholarship and attended the University of Hawaii ROTC Program. He earned a Bachelor’s of Science degree in International Business from Hawaii Pacific University. In 2011, he deployed to Afghanistan with the 3/509th Parachute Infantry Regiment as a company executive officer in support of Operation Enduring Freedom. In 2014, he completed the Civil Affairs Qualification Course and was assigned to the 92nd Civil Affairs Battalion (Special Operations) (Airborne). Over the following five years, he completed three operational tours to the European theatre under Task Force 10 and Naval Special Warfare Unit Two in support of Operation Atlantic Resolve. In 2019, Stephen was selected as a GEN Downing Scholar and attended Georgetown’s McCourt School of Public Policy. He graduated with a Master of Public Policy in 2021. Stephen is currently serving as Commander, F Company, 96th Civil Affairs Battalion at Ft. Bragg, NC.