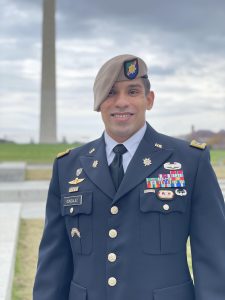 Major Luis Gonzalez was born in Mayaguez, Puerto Rico. He graduated from the University of Florida in 2009 with a Bachelor of Science in Family, Youth, and Community Sciences and commissioned from Officer Candidate School in 2010 as a Military Intelligence officer. While attending the Military Intelligence Basic Officer Leader Course, Luis was selected by the 75th Ranger Regiment for their Junior Officer Military Intelligence Pipeline.