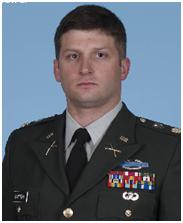 Major Canterna received his commission as an Engineer Officer on May 10, 2001 upon graduation from Rensselaer Polytechnic Institute in Troy, New York.  In 2004 Major Canterna was approved for a branch transfer and was reclassified as an Infantry Officer.

Major Canterna and his wife Jennifer are the parents of Shaun (8), Dylan (3), and Vanessa (1).  They currently live in Gig Harbor, Washington.